This past weekend, I was at the D23 Expo in Anaheim, California where I heard all the announcements and presentations from Disney, Marvel Studios and Lucasfilm. Read on to learn all the upcoming movies and guest surprises from that day!

This past weekend at the D23 Expo, Disney Parks presented it’s fabulous plan for new attractions, resorts and cruise line at the Disney Parks Panel. Many rumors have been floating around the internets for the past few months and I am happy to be able to confirm some of them for you!

Walt Disney Parks and Resorts Chairman Bob Chapek unveiled more than a dozen new experiences coming to Disney parks and resorts on Saturday at the D23 expo. We were always shown a few sneak peeks at much-anticipated projects in development, confirming several of these rumors.

The presentation began with a fun musical number honoring various attractions and shows throughout the Disney Parks. There is always something so nostalgic about hearing songs you love from the parks, don’t you agree?

The next two hours moved quickly as one announcement after the other was met with excitement & applause. Here’s the most exciting ones we learned:

The next biggest land to come to Walt Disney World, Toy Story Land, was given an opening date of Summer 2018. Ok, not so much a rumor that hasn’t already been confirmed, but it was exciting to see a behind-the scenes clip of what construction looks like now and to hear when it will open. 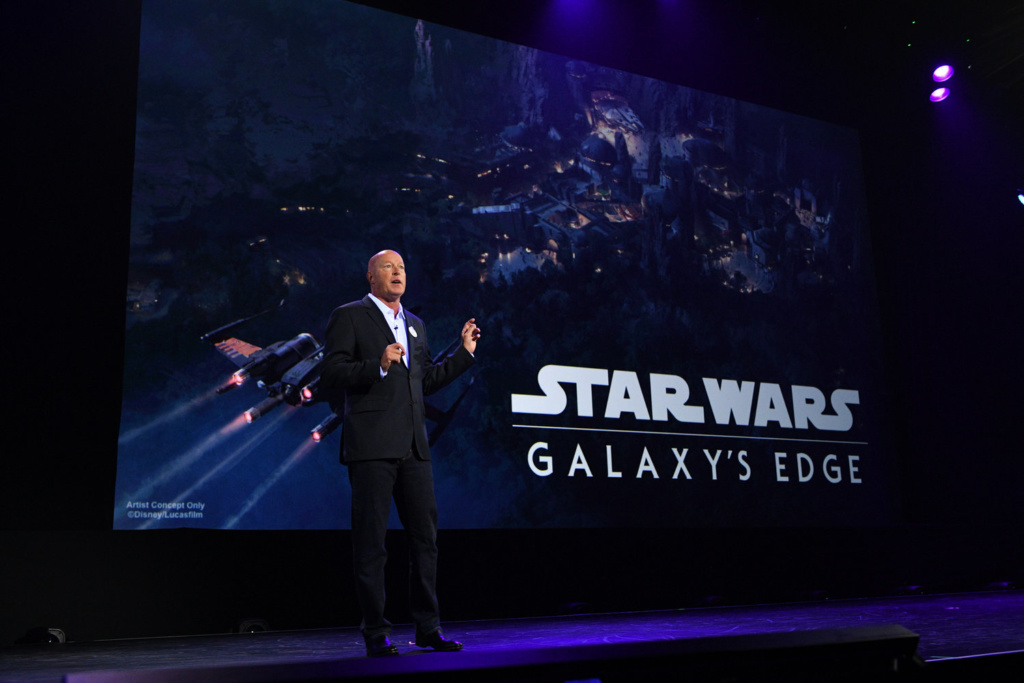 The two Star Wars themed lands finally have a name: Star Wars: Galaxy’s Edge! This incredible 14-acre land will have two anchor attractions. You will be able to step right in the middle of a battle between the First Order and the Resistance inside a hangar bay on a Star Destroyer.

Now don’t geek out too much, but we will also have the chance to fly the Millennium Falcon! We learned that several fun characters will be roaming the land, including BB-8, Chewbacca, Rex and Kylo Ren. Star Wars: Galaxy’s Edge will open in 2019, with the first land debuting at Disneyland Park in Anaheim, then at Disney’s Hollywood Studios in Orlando.

The Disney Parks & Resorts has a booth at D23 Expo with a full-scale model of what we can expect Star Wars: Galaxy’s Edge will look like.

One of the most popular attractions at Shanghai Disneyland is coming to Tomorrowland in Magic Kingdom. A thrilling, Tron-themed attraction will be added in a new area near Space Mountain at Magic Kingdom. Can we hope it will replace Stitch’s Great Escape?

Regardless of where it goes in 2021, take a look at how cool of an attraction it is!

With Epcot’s 35th Anniversary next year, rumors where big changes were coming. Chapek confirmed some of the new attractions and experiences that we have been reading about online.

Ratatouille will be added in an all-new space in the France pavilion at World Showcase, bringing the popular attraction over from Disneyland Paris.

And yes, you heard it correctly, Epcot will get a Guardians of the Galaxy attraction as well. Because apparently Peter Quill visited Epcot as a bay and wanted to bring the Guardians back.

Updates are coming to Mission: SPACE – a new Green Mission at Mission: SPACE will take guests on a stunning tour around the Earth, and an updated Orange Mission will make the trip to Mars even more spectacular. There will also be a new space-themed restaurant in Future World.

The first-ever Mickey-themed ride-through attraction comes to Disney’s Hollywood Studios. Mickey and Minnie’s Runaway Railway plans to take us into an actual Mickey Mouse cartoon short with a new technology. Now it wasn’t confirmed here where exactly Mickey and Minnie’s Runaway Railway will be in the park, but with the announced closing of the Great Movie Ride, we anticipate this is where it will be going.

A long-awaited rumor was confirmed for the Disney Cruise Line. Not just two ships are being added, but three! All three ships will be powered by one of the cleanest-burning fuels available, liquefied natural gas. All three ships are scheduled for completion by 2023.

We also saw a peek behind the scenes of a new Broadway production of Beauty and the Beast that comes to the Disney Dream in November.

How fun is this?? An all-new Minnie Van service will provide a point-to-point transportation service in these fun-themed vans – a “Minnie” van, get it? No specific details or time line was given.

Additionally, the Disney Skyliner will give guests a birds-eye view of Walt Disney World Resort and help alleviate the already crowded buses and boats. This brand new system will connect Disney’s Art of Animation, Pop Century and Caribbean Beach resorts, as well as the proposed new Disney Riviera Resort, with Disney’s Hollywood Studios and the International Gateway at Epcot.

One of the most exciting announcements of the presentation, a completely immersive Star Wars-themed hotel will be opening at Walt Disney World.   Dedicated entirely to the galaxy of Star Wars, guests will feel as if they are actually in a galaxy far, far away. One of the examples Chapak gave – hotel windows will look out into space!!! What?!?!

The presentation ended with a touching dedication to all the Cast Members who help create unbelievable memories for guests all over the world. We heard a particularly touching story abut an autistic boy and his desire for a green balloon that left no dry eye in the house. And to top it off, out walks dozens of Cast Members with hundreds of green balloons, creating a special memory for everyone in the audience.

I know I have said it before, but it’s amazing attractions like the ones mentioned above and dedicated Cast Members that make each & every trip to Walt Disney World so special and the reason why we keep going back. And with all the announcements made at D23 Expo, we are ready to book tickets for the next decade.