You are here: Home / Dallas/Fort Worth / Cowtown CattlePen Maze ~ Fort Worth, Texas
Spread the love 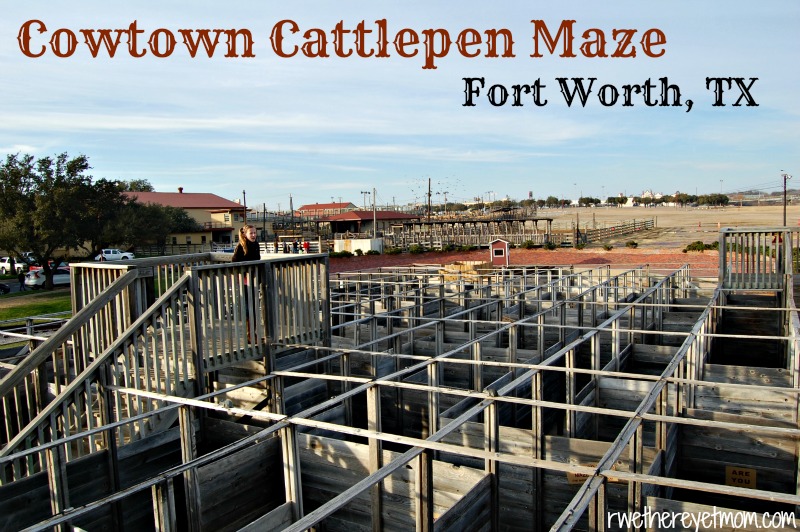 The Fort Worth Stockyards hosts a fun way to burn off some energy and possibly get lost at the Cowtown Cattlepen Maze.   This human maze is built with over 5400 square feet of wooden pathways that resembles an actual cattle pen.  When my kids saw it, they immediately were up for the challenge.

I was able to stand on an observation deck to watch them scramble, get lost, get frustrated, and then race away when they found an opening.  From up above it looks like a mess – I even had a hard time figuring out which way to go.

The maze gets changed periodically, so there is a new challenge each time you visit.  And challenging it was – it became a little frustrating for them at times.  But it was great to see them work through the maze and race to the finish.

It took both of them under 15 minutes to complete, but it is a reasonable price, so absolutely worth the fun.  They both finished and received their prize and said they wanted to go again to improve their time!

This is a fun & quick activity to do if you have ridden the Grapevine Vintage Railroad and have some time to kill at the Fort Worth Stockyards before heading back to Grapevine.

Instead, I just threw them in jail so I could go enjoy the rest of the stockyards…..

Other Fun Things to Do in Fort Worth:
Fort Worth Museum of Science & History– Titanic Exhibit
Top 10 Things to Do at the Fort Worth Museum of Science & History
Fort Worth Zoo
Cowboy Stadium Tour
Grapevine Vintage Train
Log Cabin Village
10 Fun Things to Do at the Fort Worth Stockyards
Texas Travel Facts for Cowtown Cattlepen Maze:
Location: 145 E. Exchange Ave, Fort Worth, TX
Hours:  Open Daily weather permitting
Admission: $6.00 (children 2 & under free with adult paid admission)
Recommended Time: 30 minutes
Good to know: Admission is good for one trip through the maze; you can let the kids go through the maze while you watch them from the observation deck
Website: http://www.cowtowncattlepenmaze.com/index.html