You are here: Home / Disney / 11 Tips to Run a Disney Race at Walt Disney World
Spread the love 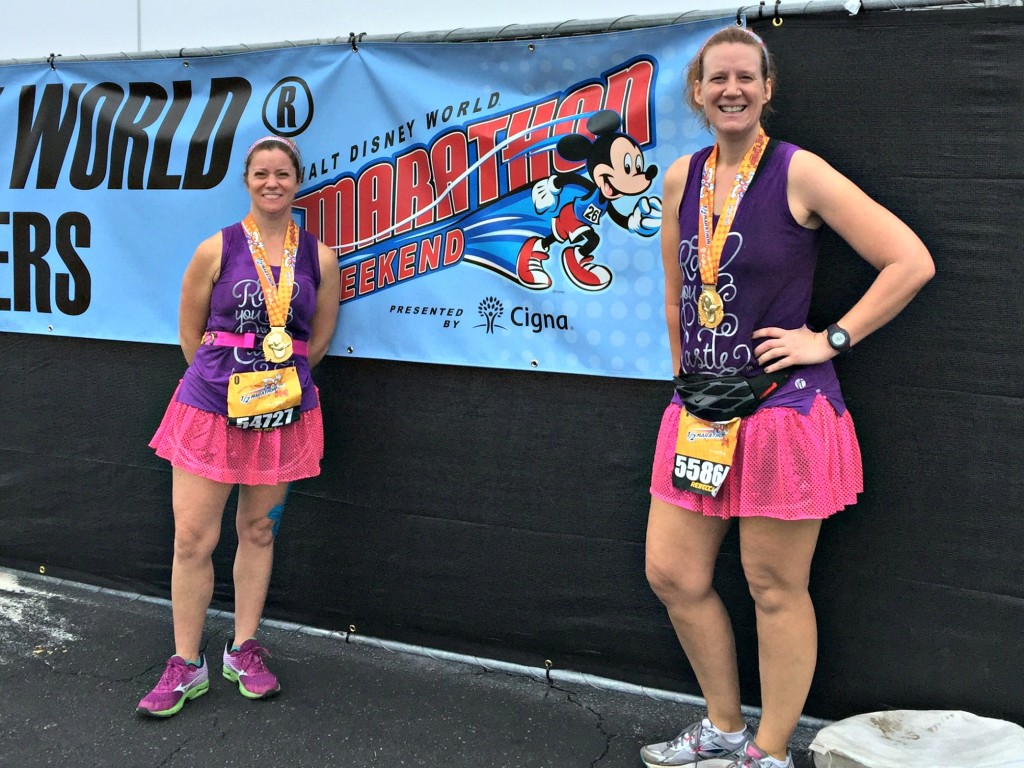 RunDisney hosts 5K, 10K, half-marathon, and full marathon races at both Walt Disney World and Disneyland several times a year.  I just got home from a race and put together a list of 11 Tips to Run a Disney Race. Each race is themed in fun ways, with characters and challenges and there are events that coincide with the race weekends at the parks.  It has been my dream for a few years to run a Disney race and I am thrilled to have finally done it.  I learned many great tips & lessons from the race that I am sharing with you here.

I did it! This past weekend, I ran my very first RunDisney race. I was the least prepared than I have ever been for a race yet, this race tops my list of favorite races to run.  I ran the half-marathon at the Walt Disney World Marathon weekend.  This race weekend hosts a 5K, 10K, half and full marathon race – one for each day, Thursday thru Sunday.  For those brave enough to attempt all 4 races, you can earn an additional medal – it’s called the Dopey Challenge – get it??  Don’t laugh – I went into the weekend thinking all Dopey Challengers were CRA- ZAY and left thinking I wanted to attempt it in a few years (and still do).

A RunDisney race is incredibly organized and well run.  At WDW, you run thru the parks.  The half-marathon runs thru the Magic Kingdom and Epcot.  The full marathon runs thru all 4 – Magic Kingdom, Animal Kingdom, Hollywood Studios, and Epcot – which is why I now want to run it!  The race attracts a ton of people – like 26,000 people, so it has to be organized.  And it was.

My running partner and I went into the race not really knowing much about it.  Neither of us did much research – we were just excited to be running it.  So we learned a lot of tips along the way.  For those of you that are on the fence about running a RunDisney race, this post is for you.  It was a very entertaining race, with characters, bands, music and lots of cheering along the route.  You get to run backstage in the parks, which is a totally cool perspective if you are a Disney fan. And you get to run thru the parks when they are not open to the public – it was SO COOL to run down Main Street USA and then thru Cinderella’s castle – quite the experience!

So now that I have tempted you, here’s a few tips to run a Disney race for those of you running your very first RunDisney race at Walt Disney World (though I am sure many of these tips are applicable to Disneyland as well!)

11 Tips to Run a Disney Race at Walt Disney World

Sign up the day the race goes on sale – these races sell out folks! Because they are SO MUCH FUN! My recommendation is to sign up for the email alerts on rundisney.com and they will keep you informed as to when registration is.

Create a reminder to go back into your registration and add your previous race time (if you have run a race before) so that you get placed in the correct starting corral.  I did not remember and thus was placed in the last corral out of 16 corrals. Yes, you heard that right – 16 corrals. Each corral gets their own dedicated start with fireworks, but being in the last corral, we didn’t start until an HOUR after the race started. An hour.

The starting line is a little longer than a mile from the drop off point – I measured it from the bus drop off to my corral (remember I was P).  So be prepared to walk to a ways to your start (and make sure you plan enough time for it).

Listen to the recommended times the guide you get with your race gear recommends. I didn’t think we really needed to catch the bus at 4AM for a 5:30 start time, but it really does take the full hour & a half to go thru security bag check, go potty, and walk to the start.

Go potty – but don’t stop at the first bank of port-a-potties you see.  There are TONS and if you are in the back of the corral pack, there are a bunch over by them with much smaller lines than at the bag drop area.

Bring cash or your magic band with you to the race. There are many concessions and more race vendors to check out after the race.  Also, by having your magic band, you can easily get back into your hotel room incase you get separated from your party.

Stay on property & use the provided transporation.  Disney has running this race down pat.  With the early start times, it just makes sense to use what they provide you.  My friend drove his car to the race and had a huge traffic jam to get out of the Epcot parking lot.  We just had a short walk to the bus and we were back at our hotel within minutes.

Feel free to dress up!  So many runners are in costume and it is SO FUN to see them all.  Obviously, keep in mind that you are running a race, so follow the rules set by RunDisney and keep it comfortable.

Try the Pasta Party at Epcot – totally fun and gets you in the mood.  The food was pretty good, but the DJ made the night with a fun dance party and there are characters there to snap a pic with.

It’s hard to avoid going to the parks – this is Walt Disney World after all! Just be concious of how much walking and standing you do, especially the day before your race. I mean, you can’t come to Walt Disney World and NOT enjoy a Dole Whip Float.  I totally think this was my secret weapon to a great race!

Take your time and enjoy this race.  This is not a race to PR in.  There are many congested areas to the course (hello! Your’s running THRU Cinderella’s Castle with 26,000 other people!) and so many great photo opportunities.  It’s not everyday you get to run thru the Disney Parks, so enjoy every minute of it!