While in Los Angeles for the Moana Red Carpet Premiere, we had the opportunity to meet and interview the directors of the movie, Ron Clements & John Musker.  It was such an incredible opportunity to hear how the story of Moana developed and other insider scoop. 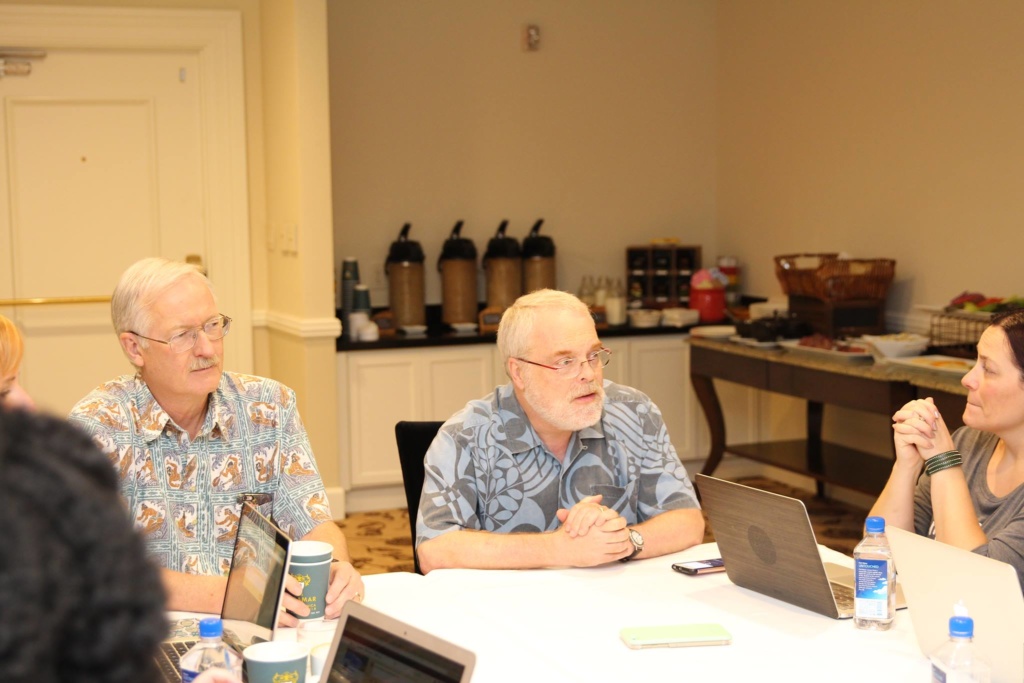 As I sat here writing this article this morning, I was waiting to hear the 2017 Gold Globe Nominations….I’m feeling certain that Moana, which is now on it’s THIRD WEEK AT NUMBER ONE at the Box Office, will be nominated for a Golden Globe.  It’s just that good – the story, the music, the animation – it’s a terrific movie, even if you are not a fan of animated movies.

It has been such an honor to have been able to meet the people responsible for & write about Moana one rate past few weeks.  Today, I get to tell you more about the 2 men behind the movie – the men who brought it to life – from just a little story based on Polynesian culture to the blockbuster hit that has Dwayne “The Rock” Johnson rapping.

Moana is the seventh Disney animated film that Ron Clements & John Musker have directed together.  Besides Moana, they have directed: The Little Mermaid, Aladdin, Hercules, Treasure Planet, The Great Mouse Detective, and The Princess and the Frog.

2. It Started as Mighty Maui

It started as a movie about Polynesian mythology and a shape-shifting demigod named Maui who was unbelievable. But when Musker & Clements pitched the idea to John Lasseter, he wanted more. After visiting the islands, the story evolved to a character called Moana, which means ‘ocean’ and someone who wants to be a navigator like her ancestors.

3. They Did Their Research

Musker & Clements spent three weeks in Samoa, Fiji and Tahiti. And they met with cultural ambassadors, linguists, anthropologists, sailors and chiefs to learn best how to represent the stories & the culture. As they did the movie over the course of the years, they kept people involved from the Pacific islands. They had an oceanic story trust that they would bounce story ideas & costume ideas off of.

Maui was originally designed more to look like Dwayne Johnson – bald. But when some Tahitian people, they felt that he had to have long hair – “long hair is part of his power.” So they added his hair based on a Polynesian football player’s long hair.

Musker & Clements worked with legendary animator Eric Goldberg (The Genie in Aladdin) to draw Maui’s tattoo & self-conscious “Mini Maui”.  Which was great for a lot of the younger animators to learn from & work with Roberts as they would do the CG Maui and he would do the hand-drawn part.  They were thrilled to get a chance to learn from this “living legend of animation.”

6. Did you Find these Easter Eggs in the Moana?

It’s tradition for Disney animators to hide Easter Eggs – other Disney characters – in their movies.  We were able to hear about some of the ones Musker & Clements hid in Moana.  Have you seen them yet?

For the 3rd Week in a Row, Moana is #1 at the Box Office!! How many times have you seen it so far?

Other Articles from the Moana, The BFG Blu-ray Event, ABC TV Event & Stuck in the Middle Event you may enjoy:

I’m Heading to the #MoanaEvent
Walk the Moana Red Carpet with Me
She’s Not a Princess Mom, She’s a Hero!
Exclusive Interview with Moana’s Maui, The Rock
That Time I Met Musical Genius Lin-Manuel Miranda
Exclusive Interview with Moana’s Auli’i Carvalho
A Conversation with the Cast of Disney Channel’s Stuck in the Middle
Holiday Gift Guide for Moana: Moana-Inspired Gifts
The BFG Blu-Ray: A Perfect Holiday Gift
Behind the Scenes on the Set of Speechless
A Conversation with The BFG Roald Dahl’s Daughter, Lucy Dahl
Behind the Scenes on the Set of ABC’s Dr. Ken
Nicole Scherzinger Had To Play the Role of Moana’s Mother
6 Fun Facts About Moana from Directors Ron Musker & John Clements

Disclaimer: Disney sent me to Los Angeles on an all-expenses paid press trip, in exchange for my coverage of the red carpet premiere of Moana. All opinions are my own.