You are here: Home / United States / 7 Cool Reasons to Stay at the Hard Rock Hotel Orlando
Spread the love

When I was a teenager, my favorite place to visit when traveling was a Hard Rock Cafe’.  It was a goal of mine to see how many Hard Rock Cafe’ t-shirts I could collect. Well since I was just a teen and my parents controlled the vacation budget, the most exotic HRC shirts I had were New York City and Las Vegas.  Still, that was totally cool in my books.

Fast forward  many years and we found ourselves staying at the Hard Rock Hotel Orlando at Universal Orlando.  I knew it would be a cool, hip place to stay but honestly, I was so excited to discover some really cool amenities that made our stay that much better.

Hard Rock Hotel Orlando is one of five hotels available to choose from at Universal Orlando.  Located minutes away from Universal Studios Florida and Universal’s Islands of Adventure (and coming-soon, Universal’s Volcano Bay), it’s considered one of their “premier on-site resort hotels”.  Not only is is a beautiful hotel to stay in, it offers quiet rooms and comfortable beds to get a good night’s rest after a long day in the parks.

Our family of four (2 adults, 16 & 7 year old) stayed comfortably in a pool view guest room.  Here’s a quick tour of our accommodations:

7 Reasons to Stay at the Hard Rock Hotel Universal Orlando: In Room Touches

If you didn’t yet have a chance to watch our video tour of our room, the rooms at the Hard Rock Hotel Orlando are tricked out to make you feel like a rock star – no really.  When you walk in, there is rock music playing on the tv, hip pillows on your bed, and even a guitar pic on your night stand.

The decor all has a very cool vibe, like this drum stick collage.

And who doesn’t want to know that they are as tall as Adele?? Check out this mirror!

7 Reasons to Stay at the Hard Rock Hotel Universal Orlando: Characters Wake You Up

The pool at the Hard Rock Hotel Orlando was outstanding – big & spacious with a sand volleyball court and weekly dive-in movies.  But more fun for my kids? Diving under the water to experience a rock concert with the underwater speakers.  They both came home asking if we could get speakers for our pool!

7 Reasons to Stay at the Hard Rock Hotel Universal Orlando: Play A Guitar

Guests can reserve one of 20 Fender guitars to jam out in their rooms! Don’t worry moms! Guitars come with headphones so you don’t have to hear them. And for those kiddos who don’t yet know how to play, they can take a lesson on the tv!

One thing I always loved about the Hard Rock Cafe’ was the vast collection of rock memorabilia and the Hard Rock Hotel Orlando has something to see on every floor.  I saw shoes, guitars, concert outfits and more from the likes of James Brown, Taylor Swift, Jennifer Lopez, and Lady Gaga.  But my favorite piece? John Lennon’s pajamas. My kids didn’t get it, but I did. 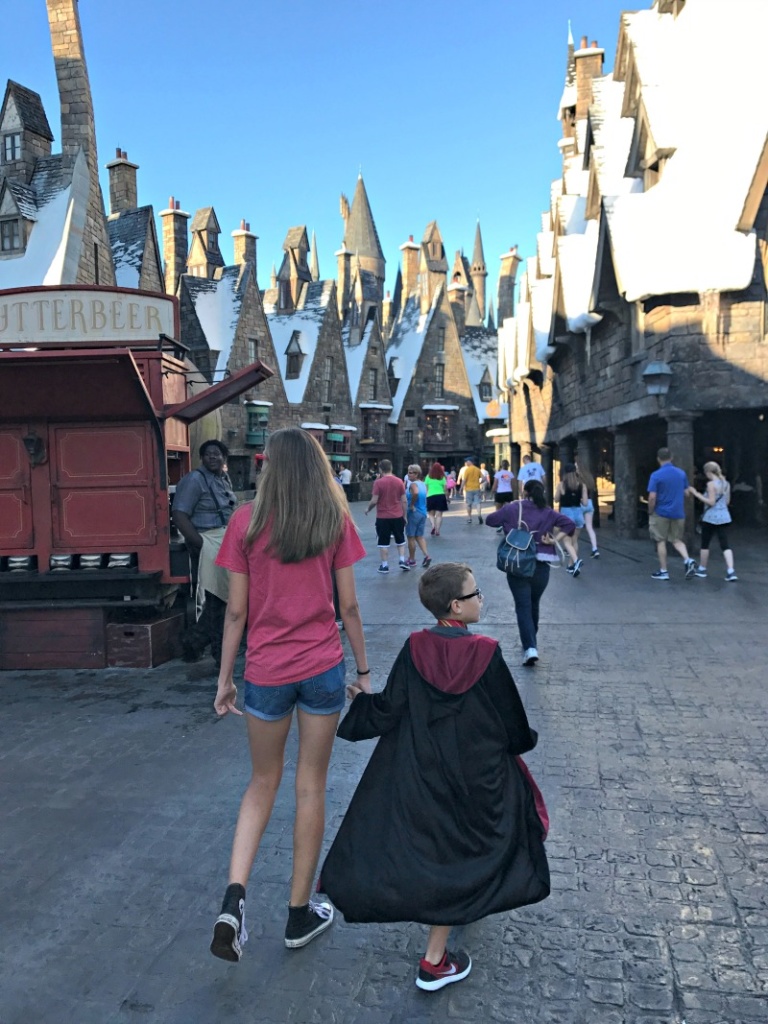 Universal Orlando resorts guest can get into the Wizarding World of Harry Potter (either Hogsmeade or Diagon Alley) or Universal’s Volcano Bay one hour before the park opens to the general public.  This is a GREAT opportunity to ride some of the rides that typically have longer waits during the day.

One of the best benefits of staying at a premier level hotel at Universal Orlando, is that every person on your reservation gets to skip the lines at the park with the Universal Express Unlimited.  We visited in April and we utilized this pass to walk on the rides with little to no wait.  This is an $89 pass/person, so this is really a great benefit to staying here, especially during the summer.

Disclosure: My family & I were a guest at the Hard Rock Hotel Orlando. We were not compensated for the article.  All opinions are my own.