You are here: Home / Disney / 9 Things You Don’t Want to Miss at Summer of Heroes at Disney California Adventure Park
Spread the love

A trip to D23 Expo would not be complete without spending a little time at Disneyland.  I was thrilled to be able to spend not one, but TWO evenings at both Disneyland and Disney California Adventure Park.  Not only did we attempt to see as many attractions as we could see, we also indulged in quite a bit of the Summer of Heroes food offerings and closed the park (Disneyland) down each night.  We were hard core with our few hours we had!

This summer, Disney California Adventure Park is celebrating a Summer of Heroes! With the popularity of Marvel Super Heroes and the opening of the new Guardians of the Galaxy – Mission: BREAKOUT!, it was the perfect time to introduce some fun food and experiences for the summer.  And rumor has it from the D23 Expo Disney Parks and Resorts panel, some of the experiences were so popular, that they may be coming the Disney California Adventure Park permanently.

But until those specifics are revealed, you have until September 10 to try as much of the Summer of Heroes as you can.  So, here are the 9 things you must not miss! 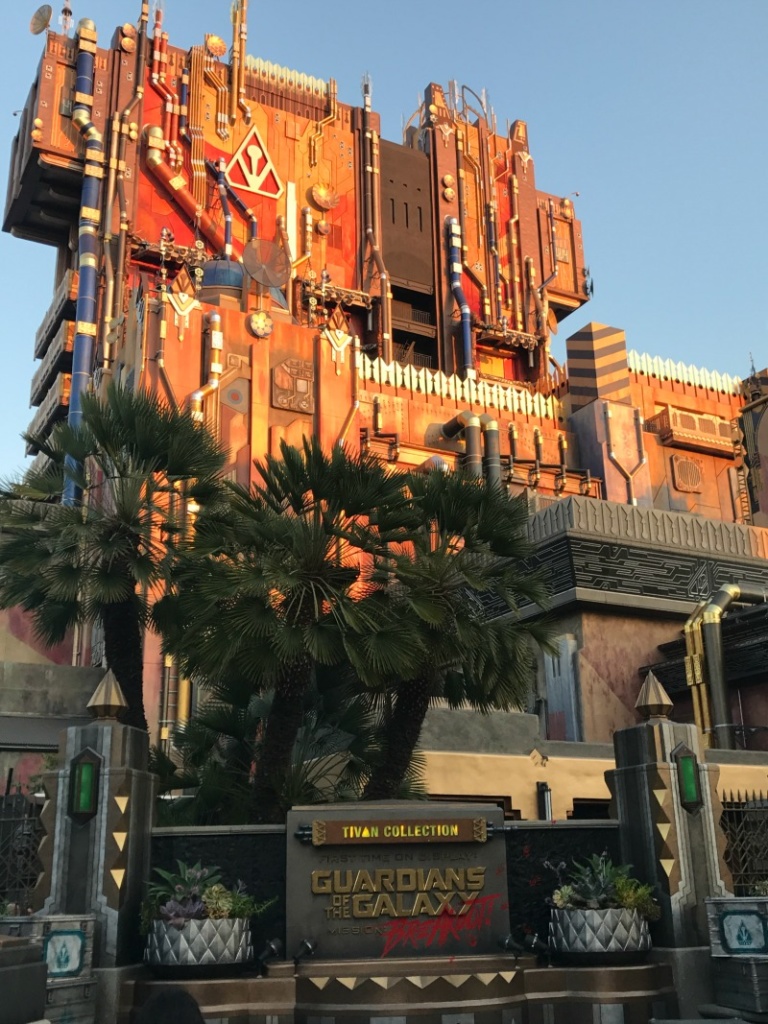 One of the most popular attractions at Disneyland right now is the new Guardians of the Galaxy- Mission BREAKOUT!  Opening just in May, a typical standby wait for this ride is 70 minutes but can be as long as 2-3 hours! Is it worth it? YES!

The former Tower of Terror has been converted into the fortress of Taneleer Tivan, the Collector featured in the Guardians of the Galaxy. The Collector has imprisoned the Guardians in his tower and guests help Rocket break the other Guardians out! The theming is fantastic and the actual ride is phenomenal. I truly laughed the entire ride.

And to give you a peek at what we saw inside the attraction, I bring you this fun gem.  I dare you not to laugh at his screams of terror…..

And this photo is just a small indicator of how much we loved it…..

Similar to the Jedi Training Academy at Disney’s Hollywood Studios in Walt Disney World, guests can train to be an Avenger several times throughout the day.  Kids ages 6-12 can train with Black Widow and Hawkeye to join the Avengers team. You must sign up for this in advance, so make sure to head to the area located off Hollywood Lane when you first get to the park to ensure your child’s spot.

Be still my heart, when Captain America walked out, I swooned. Literally.  What can I say, I’m TeamCap all the way.  Located at the end of Hollywood Lane, meet & greets with Captain America, Spider-Man, and Black Widow happen throughout the day.  What I loved the most was that Cap spent plenty of time with each guest, even flirting with the ladies…..

The Summer of Heroes is filled with a bunch of fun & inventive foods to try, including Groot Bread – basically sourdough bread shaped like Groot. You can get it plain or Jalapeño Cheddar – just a warning, the Jalapeño Cheddar is HOT!

#5: Cool off with a Galatic Cocktail

Lots of fun & inventive drinks are on the Summer of Heroes menus, so be sure to pick one off, especially on a hot afternoon.  We tried the Sol-Horacha margarita from Nowhere Eats to pair with the yummy tacos below.

Can’t go home without some fun merchandise from the Summer of Heroes too.  You will find all kinds of Avengers toys, t-shirts, and more all over the parks.  We took home this fun shirt.

#7: Eat the Most Dangerous Tacos in the Galaxy

Also found at Nowhere Eats, Gamora’s favorite –  the Most Dangerous Taco in the Galaxy. These yummy tacos featured barbacoa beef, green onion slaw, and habanero salsa. And they were really good!

#8: Dance with a Guardian at the Awesome Dance Off

Where else can you dance with a Guardian but at the Summer of Heroes?  It happens several times a day and it is hilarious to watch!  Check the times and make sure you don’t miss your opportunity to have a Dance Off too!

#9: Finish the Day with a Friendly Neighborhood Macaron

We were hunting for the Heroes Doughnuts we have been seeing all over Instagram, but unfortunately Schmoozes had already run out of them for the day, so we settled for the Friendly Neighborhood Macaron, 2 brightly colored macarons sandwiched together with vanilla ice cream – a delicious treat to end our day at Disney California Adventure Park!

Bonus: See the sunset behind the Mickey Wheel:

Don’t miss all the fun at the Summer of Heroes at Disney California Adventure Park this summer thru September 10, 2017!