You are here: Home / United States / A Tale of a Stolen Totem Pole? You Decide!
Spread the love

Last year, during our Underground City tour in Seattle, Washington, we heard the most fascinating story all about a totem pole.

The Tlingit pole standing in Pioneer Square was “acquired” in 1899 by a group of Seattle businessmen who took a trip to Southeast Alaska and stopped in the Tlingit village of Tongass. They assumed that the village had been abandoned and proceeded to remove a large pole that was taken back to Seattle and erected in Pioneer Square. In fact, the Tongass people were just away at their fishing camps, and when they returned, they were unhappy to find the pole stolen.


On October 18, 1899, the 60-foot totem pole is unveiled in Seattle’s Pioneer Square and “greeted by cheers of a multitude of people.” It was “presented” to the City of Seattle by the Chamber of Commerce “Committee of Fifteen” — the group of Seattle vandals (who were prominent citizens) that had taken the totem.


Native Americans of the Northwest Coast carved totem poles to document important events, family history, and to identify a family or a clan. The Seattle totem belonged to the Raven Clan (English surname Kinninook) and had been carved in about the year 1790 to honor a woman named Chief-of-All-Women who drowned in the Nass River while on a journey to visit an ailing sister. The top carving was that of a raven, which in Tlingit mythology did everything, knew everything, and seemed to be everywhere at once.


The thieves had been observed and their actions were reported to Governor Brady in Alaska. The Tongass people asked for the return of the pole or payment for it. A hefty $20,000 is what they asked for!  After lengthy negotiations, a payment was made ($500), and the pole remained in Seattle.


Unfortunately, the totem pole was heavily damaged by fire in Pioneer Square in 1938.  A replica was carved by a group of Tlingit carvers from Ketchikan as part of a Civilian Conservation Corps project. This replica pole still stands in Pioneer Square in Seattle today. 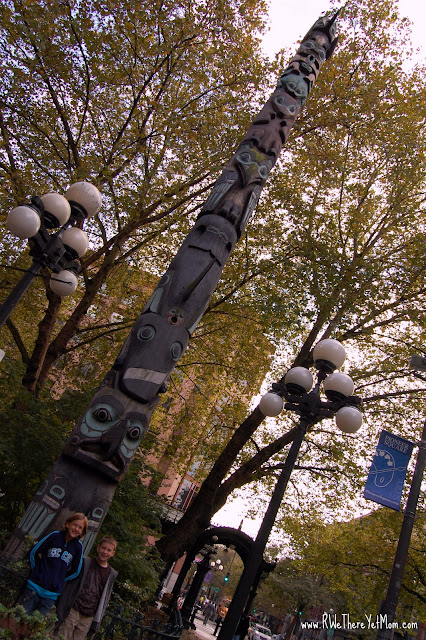 We love hearing fascinating bits of history like this! Have a good story about something you saw on vacation?  Maybe a living legend near your neck of the woods?  Tell us about it!  Email us at [email protected]