You are here: Home / Disney / Alden Ehrenreich Takes on the Pressure of Creating a New Han Solo
Spread the love

Last week, I had the amazing experience to attend the Solo: A Star Wars Story Press Junket in Los Angeles, which included the Red Carpet World Premiere of the movie, as well as interviews with Ron Howard, Woody Harrelson, Alden Ehrenreich and more (those interviews are coming out over the next week).  And today I get to tell you all about my time spent with the man who took the enormous pressure of playing the role of Han Solo, after Harrison Ford – Alden Ehrenreich.

“How can I love a different Han Solo?”

Alden Ehrenreich has made a big splash as the starring role of this summer blockbuster, Solo: A Star Wars Story.  Taking the reins of Han Solo after Harrison Ford has made us love him, is a very big task.  In fact, I have had many conversations over the last week with my Star Wars friends who have bluntly said that they just didn’t know if they could believe another Han Solo – that Ford will always be him.

Friends, let me assure you.  Alden Ehrenreich is Han Solo – it is possible to separate the two.  Ehrenreich adds the right combination of Ford’s Solo’s mannerisms while bringing his own to the role.  From the start of the movie, you just don’t question it.  And because this is a stand-alone movie, you get totally caught up in the story and love him as Solo right away.

And it was really fun to have a chance to talk to him about taking on this role, what Harrison Ford thought of it and more in a recent interview.

“I’m in sort of a daze……I just got surprised by Harrison Ford.” – Alden Ehrenreich

Before we could even get started, he told us this:

“You’ll have to excuse myself, I’m in sort of a daze, because I was just doing an interview and Harrison Ford came up behind me and it was just wonderful. I haven’t talked to him since I met with him for lunch before we shot.”

Want to see that moment?

And to think we were the first to see him right after this! Of course we all wanted to know what Ford thought about the movie:

After you got the part, what was your first thought and what did you do?

“Your mind is blown. You’re just in a daze such as I am right now. And you just kind of can’t believe it, it’s so thrilling and so exciting. And after I found out, I’m not allowed to tell anybody.  But I did (we all laughed!!) – I told my family. But then, I just didn’t know what to do. So I was like well I should find a way to celebrate this. So I went to the beach and I stood around and I walked around and then I found myself at the pier and then I was like, well I guess I’m here, I should go on a ride, so I just rode a roller coaster by myself.” 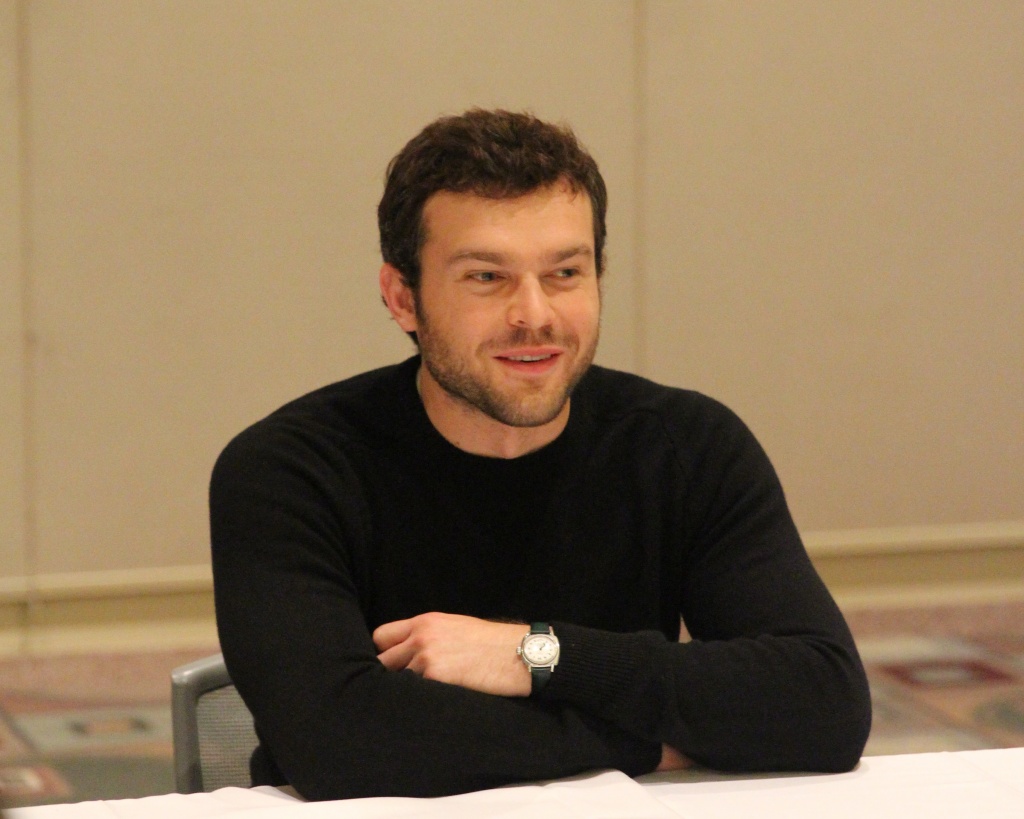 How much of your performance is Harrison Ford and how much of it is your own?

“Something that was really important to me was to make it feel like a real person, that you’re watching a real person going through something. And you also want to feel a kind of continuity that you could grow into that guy. I basically started by watching all the original movies, very early on, and tried to just absorb as much as of that as I could, so that when it came time to actually do it, I wouldn’t be thinking a lot about it.”

What was that one Han Solo quirk that you made sure you nailed and how?

“Well there’s several things, but I don’t want to name them because then it’s like you’re watching for them and I want people to just watch the story. There’s a moment in A New Hope where they’re pinned in a corner and they don’t know what to do and he just starts yelling at the top of his lungs and running at them. And I feel like that’s the quintessential essence of this guy.”

What weight do you give to the opinions and thoughts of other people and how much you try to listen to yourself?

How did you deal with the pressure having to play Han Solo?

“I think that you try and identify for yourself what you have control over, and just concentrate on your job and your work. I’ve treated the whole experience like a great exercise in learning a very high stakes situation and how to navigate how much you care about. What weight do you give to the opinions and thoughts of other people and how much you try to listen to yourself?

And so it’s a great challenge in a sense from a character way and a spiritual way to try to navigate that.  And that’s been really rewarding.  Because you have to or else you’ll lose it.”

Han and Chewy have such a great camaraderie, did you and Joonas (Suotomo) work on that?

“We had a lot of time to do training together. The way we meet (in the movie) involves a lot of work, so we were the only cast members who were there in advance. And we ended up just hanging out and doing stunt training, boxing and stuff like that together for a long time, which was really great.

He’s the whole package, he’s seven feet tall with blue eyes, went to film school and he is hilarious. He’s just perfect for it (Chewbacca). I don’t think everyone even realizes the amount that he had to do technically. He has this big heart and exudes that – you really feel it. Some of my favorite work in the film was doing those scenes.” 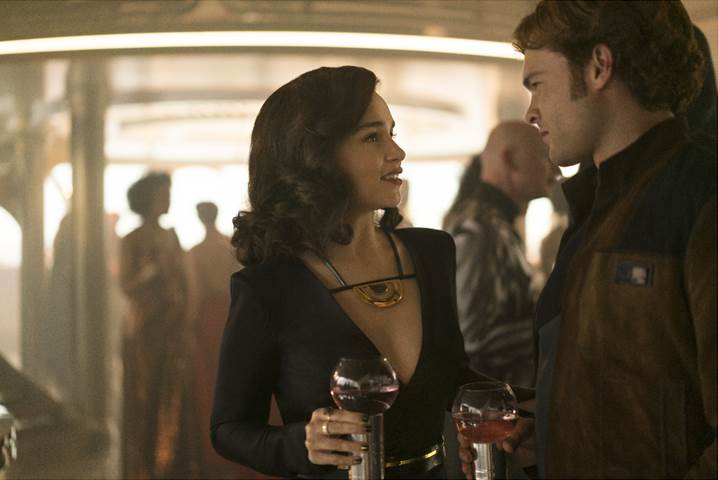 What was it like working with Emilia Clarke & are you a Game of Thrones Fan?

“So I haven’t seen Game of Thrones, I know… I know, but I’m definitely a fan of hers. She’s really wonderful, incredibly talented, and sweet as could be. She brought in baked goods for the whole crew every single Monday. The whole makeup trailer got fresh baked goods every week. And yeah it was so nice. She’s just super sweet and warm.

She was probably the person that I was most on this journey with, in a sense. Because we spent so much time together and our work just was so involved. I’m very grateful to have that partnership with her.”

How will Star Wars fans react?

What do you think fans will like the most about Solo: A Star Wars Story?

“Well, it’s almost like a bio pic of a fictional character.  So you get to watch these things that you are familiar with and love and see them come into place and how they all add up to making him the Han that we see later on.  That means so much to people and it’s so fun.  I also like the humor of it and the playfulness of the whole thing is so great.”

When did you see your first Star Wars movie and how did you like it?

“I loved it, I was five and I saw it on VHS, and I had all the toys and all the action figures.  In fact when I got to do my screen test on the Millennium Falcon, it was so familiar to me from just imagining that I was on it as a kid, it kind of put me at ease.  Walking through the hallway and the everything and all this stuff.”

What is your favorite Star Wars film?

“I think Empire Strikes Back.  I love Yoda a lot.  And I just think it’s really cool to have a movie with so much real wisdom in it and this deep philosophical background that’s put into terms that are so clear and communicable to so many people.  Like it’s just cool.”

Alden Ehrenreich is wise beyond his years.  He was insightful and purposeful in his answers.  And while he plays a fun rogue on the screen in Solo: A Star Wars Story, he was a gentleman in our interview, patiently taking everyone’s questions and looking each of us in the eyes when he answered them.

Make sure to get tickets to see Ehrenreich take on the role in Solo: A Star Wars Story next week.  Tickets are on sale now and you don’t want to be stuck not being the only one in the country not getting to see it over Memorial Day weekend!