You are here: Home / Slider / Why You Must Experience Disney’s Animal Kingdom at Night
Spread the love

One of our favorite Walt Disney World parks is Animal Kingdom and we were so excited when they  opened up this park past 6 PM.  With new nighttime experiences and the opening of Pandora World of Avatar, there is so much more to see & do at Animal Kingdom at Night! 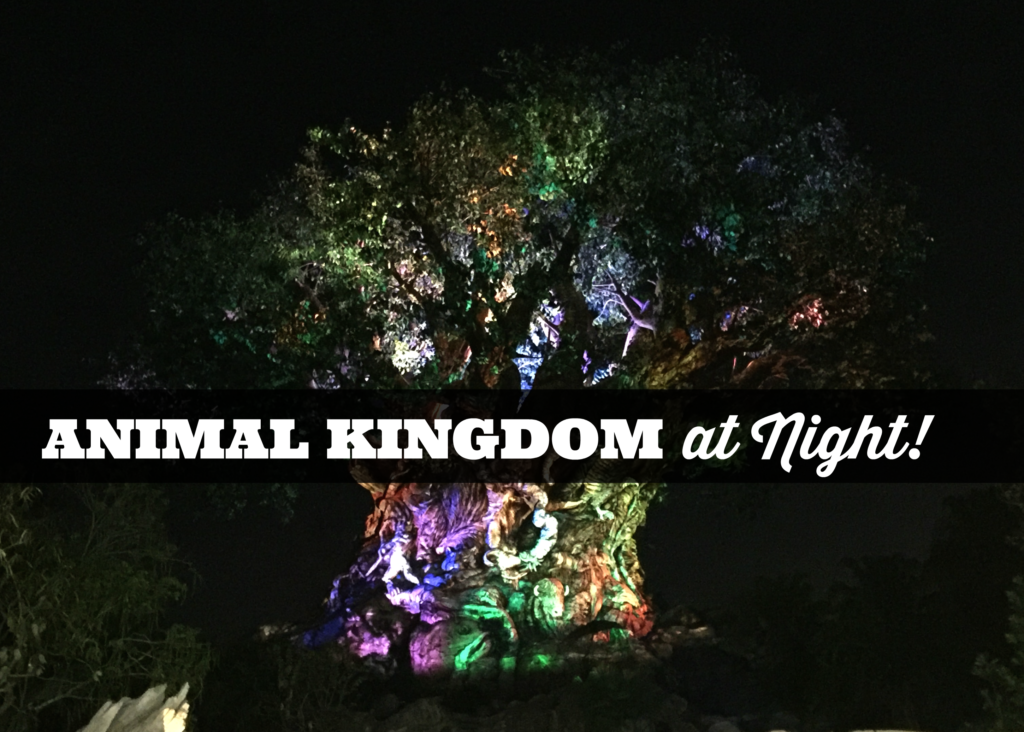 We have always loved Animal Kingdom. We love the animals.  We love the nature.  We love the conservation  message.  And we love Expedition Everest.  But what I missed most is a nighttime atmosphere.

A completely different atmosphere come over Animal Kingdom when the sun goes down.  In fact, there’s all new nighttime entertainment to enjoy:

One of the most anticipated new events of the spring for Walt Disney World was the new nighttime water and light show, Rivers of Light Nighttime Spectacular.  Debuting in February, this is an incredibly brilliant show that features glowing lanterns, magical fireflies, dancing fountains, and animal spirits.

The show begins with two storytellers teaching us through forms of authentic Asian dance that make the Rivers of Light come alive.  The show has amazing water features, with projected animal images and a wonderfully moving score. My family was mesmerized when we saw it in April – definitely worth seeing.  Here’s the sneak peek of some of what we saw:

TIP: Try to get a FastPass+ for the Rivers of Light Nighttime Spectacular.  We were able to walk right up about 20 minutes before the show started and had terrific seats up front.  Standby lines start growing about 2 hours before the show even begins.  They are also offering Dining Packages to see the show as well.

At the center of Animal Kingdom stands the impressive Tree of Life.  It’s  mesmerizing during the day, being over 145 feet tall and 50 feet wide at its base & having over 300 detailed animal carvings on it’s trunk.  And now at night, it becomes even more impressive.

During the evening hours, the Tree of Life comes alive. Watch animals dance around & communicate with one another and see several favorite Disney Nature movies come to life, projected up on the tree.   If you like Celebrate the Magic, the Cinderella Castle projection show,  you will not want to miss this one.  Here’s a sneak peek of what we saw last spring:

Animal Kingdom at Night: The Attractions

So what does Animal Kingdom at night mean for the rides at Animal Kingdom?  A few of them have a special way of incorporating night time, making it a completely different experience.

Kilimanjaro Safari comes to life at night.  The nighttime safari tour showcases all the animals in a completely different way. Because it was evening, we found the animals to be very active.  The hippopotamuses were walking around outside of the water.  The Lions were patrolling on their pride rock  and the rhinoceroses were walking across the path in front of the jeep.   As much as I enjoy Kilimanjaro Safari’s, I have to say seeing it at night was a completely different experience – one that I cannot wait to try again.

If you like to get wet during the daytime, you can continue to in the evening on Kali River Rapids.  The rafting expedition in the heart of Asia is still running in the evenings.

And one of the most anticipated openings at Animal Kingdom this summer is Pandora World of Avatar.  With 2 spectacular attractions, Na’Vi River Journey and Flight Of Passage, and unique dining, Pandora is going to be very popular this summer.

But that shouldn’t stop you from seeing it at night. Make sure to take a quick walk through Pandora at night to see the bioluminescent glow from the walkways and plants.

As if you needed another reason to visit Walt Disney World…….

Disclosure: I was invited to Walt Disney World with the TravelingMom group.  I was not compensated for this article.  All opinions are my own.