[dropshadowbox align=”none” effect=”lifted-both” width=”650px” height=”” background_color=”#ffffff” border_width=”1″ border_color=”#dddddd” ]I have a hand in the future. I’m not a passenger on this bus. I can be the driver. – Brad Bird on Tomorrowland[/dropshadowbox]

When Director Brad Bird & Screenwriter Damon Lindelof teamed up to create Tomorrowland,  they set out to make a movie that would stay with you long after you left your seat in the theater.  No, not a “this is good for you- watch it” film, but one that made you think.  Personally, after seeing Tomorrowland, it has stayed with me for weeks and I can’t wait to see it again this Friday when it hits theaters.

And while I was thrilled to have the opportunity to interview George Clooney, I was just as intimidated and excited to meet the creators of Tomorrowland.  It’s not everyday you get a chance to dip into a creative mind and learn just what inspired them to create such amazing work.  Our time with Tomorrowland Director & Producer Brad Bird and Screenwriter & Producer Damon Lindelof was limited to a quick 20 minutes, but I could have spent hours talking to them.  Here’s a bit of our conversation:

One of the more interesting facts about the movie is that the inspiration came from a box labeled “1952” found in the Disney Archives in 2007.  How exactly did this box of artifacts inspire Lindelof to write Tomorrowland?

Damon Lindelof (DL): The more that we look into the origins of the box and where it came from and who found it, the less defined answers that we get. Suffice to say we became fairly convinced looking through it that we didn’t know exactly what it was. Probably 80% of the items in the box were completely and totally uninteresting.

But the ones that were interesting to us felt like what if we were kids in third grade and someone put this box in front of us and said, tell us a story about the things that you find in this box. How would they all connect?

And we took some things like the design for the It’s a Small World ride and this weird disk that Orson Welles might have had some interest in. And we said, what if Walt Disney was a member of this secret group of geniuses ‘Plus Ultra?’  And Tomorrowland itself was actually a cover for a real place that they built in an alternate dimension? And then we were kind of off to the races.

How did Bird & Lindelof come together to write Tomorrowland?

Brad Bird (BB): Damon has been developing this idea with Jeff Jensen for about six months.  I was an admirer of Damon’s work on Lost.  And any time the (Lost) episode credited Damon, I would go to my wife “this is going to be good.” And on Mission Impossible after the movie was shot there were a couple of things that just weren’t right. Damon came on for about a month and help us fix some really very specific things.  It was like brain surgery kind of writing and he did a wonderful job.  And after I said, what are you doing next? And he mentioned this idea that he’d been developing with Jeff. And it just sounded amazing to me. So that’s when I jumped on board.

Tomorrowland begins at the 1964-65 New York World’s Fair.  We wanted to know how both Walt Disney’s concept of Tomorrowland and the fair helped in the creation of the story:

DL: I think that we are both fascinated with Walt’s futurism. He came up with the Tomorrowland concept in the 50s and 60s. But the part that Brad and I particularly zeroed in on was the 1964 world’s fair where there were a number of attractions like Mr. Lincoln, Carousel of Progress, Magic Skyway, It’s a Small World. It would be really great to see those on the big screen kind of re-create that feeling.

BB: But it’s also that world’s fairs in and of themselves were a thing where people  came together from all over the world and kind of trade ideas about the future. They had a utopian aspect.

And when we were talking about what happened to the idea of a positive future, we kind of started to notice that, that great future sort of disappeared around the time the world’s fairs disappeared.  The world went through world wars and had plenty of strife, but people clung to the idea of things in the future will be better. And that idea seems to have been retired. We’re all just kind of on this bus that we have no control over the destination.  We were just kind of looking at each other going, why did that change? And when did it change? And you know, how do we get back to it?

Can We Fix It?

The theme that runs throughout the movie, Can We Fix It?, is not meant to be the key to drive people to see it.  Bird & Lindelof made a great summer blockbuster with the intention to get people to not only go & see it, but think about it later. They jokingly admitted they didn’t want Tomorrowland compared to broccoli – Hey kids! Go see Tomorrowland – It’s GOOD for you! – Yet, they did acknowledge that they set out to make a diffent movie than what’s in theaters now a days:

BB: Our goal first and foremost is to make a great time at the movies. That said, my favorite rides in terms of movies are where I still think about them later. And there’s a lot of very loud, very fast, very disposable entertainment right now where before the lights even come up in the theater you’re thinking about something else.

And we would like people hopefully come away thinking I have a hand in the future. I’m not a passenger on this bus. I can be the driver.  We collectively are in charge of where & what we want the future to be. The future is a malleable thing that’s changing every day. And it’s being created by what people do today.

DL: We have a young woman in the movie & she is being barraged with things like  the polar ice caps that are melting, things that are going to be much worse in the future. And she asks the only relevant question which is, can we fix it? And we hope that you walk out of the movie at the end saying, you can but you have to do something. You can’t just sort of sit around and wait. The future isn’t something that happens to us – it’s something that we make happen.

And the take home – don’t go see Tomorrowland because it’s “good for you” – go to see it because it is GOOD and it will stay with you for awhile, make you think, even might inspire you a bit.

Hear a bit more about Tomorrowland from Bird & Lindelof –

Here’s why I think you should take the whole family to see the movie! Find out what prop George Clooney may or may not have taken from the set of Tomorrowland in my exclusive interview with him.  Also, find out what valuable lesson his costar, Britt Robertson learned from Clooney. 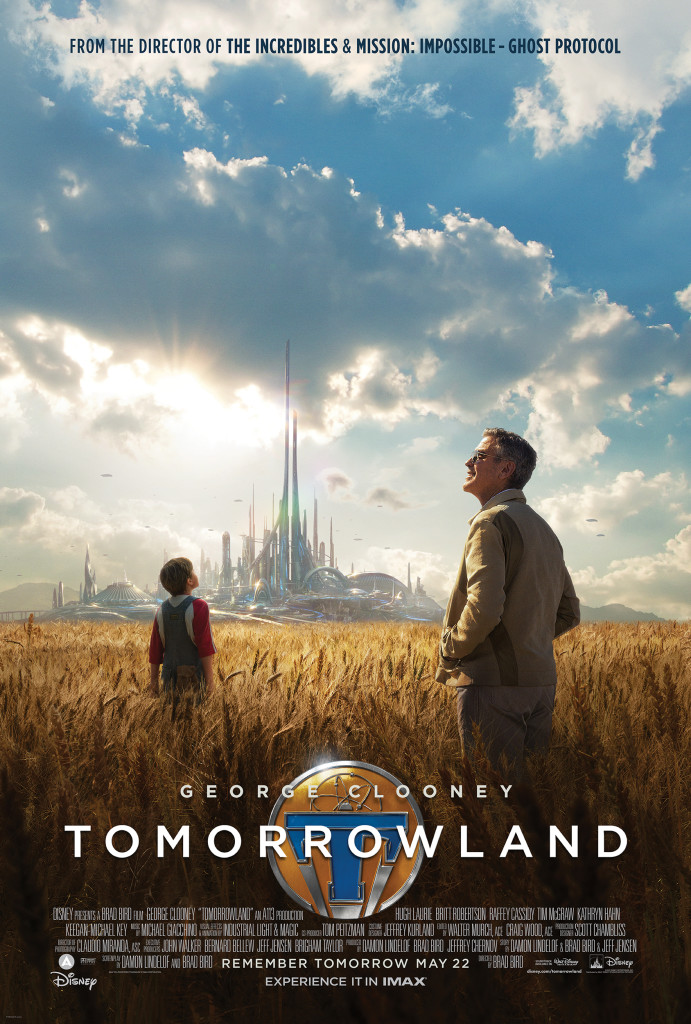