I spent last week in Los Angeles for Disney Pixar’s Incredibles 2 Press Junket, where we screened the newest film and interviewed most of the cast.  I can’t wait to share all the interviews and their thoughts on the second movie (all coming this week).  Starting with today – meet Mr. Incredible and Elastigirl – Craig T. Nelson and Holly Hunter.

My children grew up on Disney Pixar’s Incredibles. We watched it so many times, I could recite the lines in my head. Most people’s favorite line from the movie is delivered from Frozone…..you know, the one about his supersuit…..

But I’ve always been a fan of this one – I just cleaned up this mess! Can we keep it clean for… for ten minutes!

When Craig T. Nelson and Holly Hunter both began to speak, all I could hear was Mr. Incredible and Elastigirl. It was surreal.

And where they spent little to no time together in the recording booth (see below), they have the best banter together – as if they really are Mr. & Mrs. Incredible.

So we all know The Incredibles was a huge success, and it was a great movie. How did you feel about doing the sequel? Were you onboard right away and what were your thoughts on it when you heard that there was talk about it?

Holly Hunter:   I mean, I think we both were, we were not hesitating in wanting to do this sequel.

Craig T. Nelson:   Yeah, it was exciting because it was fourteen years ago – what is he gonna do; what are they gonna come up with; how can it be different; where are we gonna pick it up? I mean, we didn’t know anything. And then they talked about starting it right at the very end, and the first one starting right up, and I didn’t age. 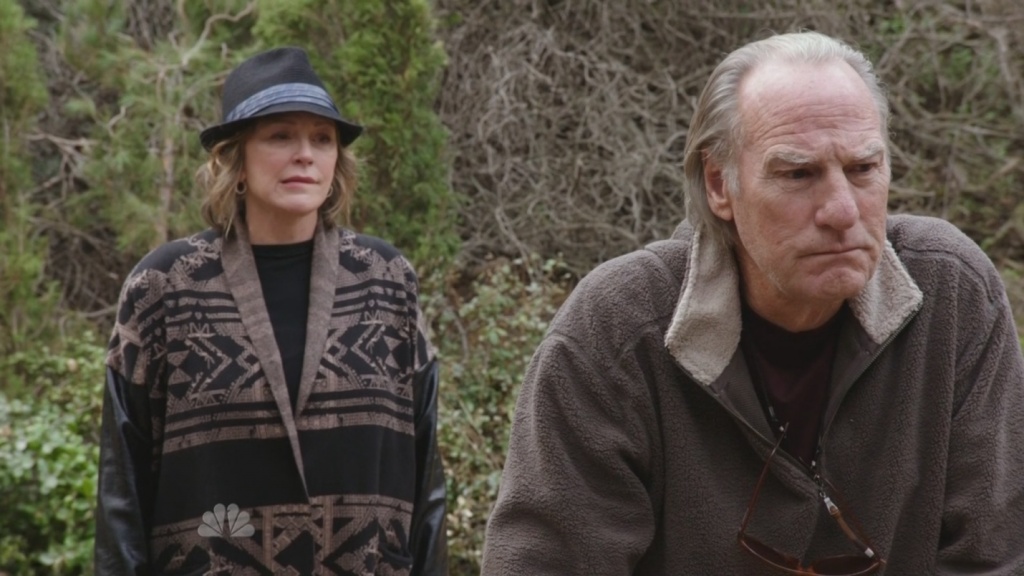 And then it was just a question for me – I wasn’t sure if I could do it vocally.  Because I’d been doing Parenthood and Zeek had a different quality- a different vocal quality, so that meant I had trepidation and anxiety. And we never saw the script; Brad kind of laid out the idea which was great. It sounded like it was gonna be fun.

How easy was it to warm up back into character? Did you have to think about it? Or did it just come naturally?

Holly Hunter:   I thought that it was quite amusing that the movie would pick up literally, like, fifteen seconds after the first movie. That was just so funny to me, and a completely and impossible thing to do in regular film, which Craig and I, that’s what we normally do is television and films. So, the ability of animation to do that was just so delightful.

And there were so many things about this opportunity for me which was kind of effortless.  Craig and I, we record with Brad and only with Brad, and so fourteen years later to encounter Brad again, with a microphone between us, was just fun. And he’s somebody that both of just inherently trust. 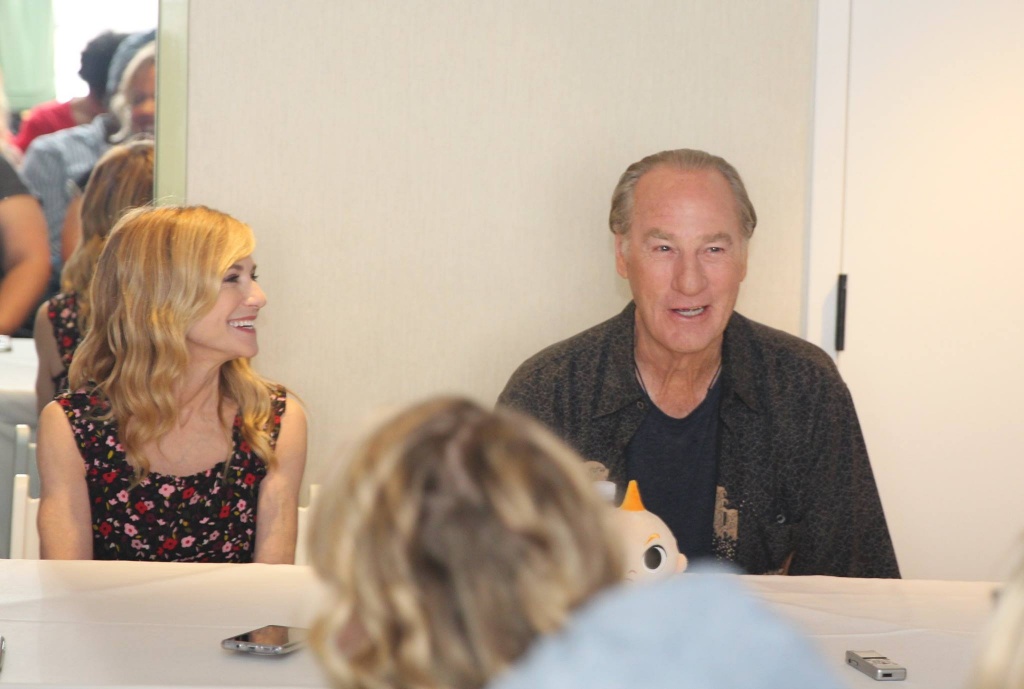 Craig T. Nelson: The fact, you know, we did the first one, we didn’t know what it was gonna be. And the thing turns out to be huge, right? So we’re waiting to see when we’re gonna do the sequel because,  you’re still actors and you’re finding, or at least some of us find that we’re not always working.

So you’re like, well, I’ve got that to look forward to, maybe, and the third year comes after the movie, and the fourth year, and then you’re going, well hell, I’m not gonna pay for the stuff I bought because I always thought I wasn’t gonna not work.

Holly Hunter:   And then the ninth year, and then the ten year anniversary.

Craig T. Nelson:   And hell, you’re too old to do it anymore. Oh, they don’t want me, you know. And you hear about the rumors they’re gonna do another one, well, like they’re gonna probably get a new Bob.

Holly Hunter:   Where I was thinking, maybe Bob and Helen would be dead by then.

Craig  T. Nelson:   I was looking forward to kinda doing the rest home version.  But to realize the impact that the first one had and how it’s longevity held up, and then to do the second one. It’s pretty amazing. 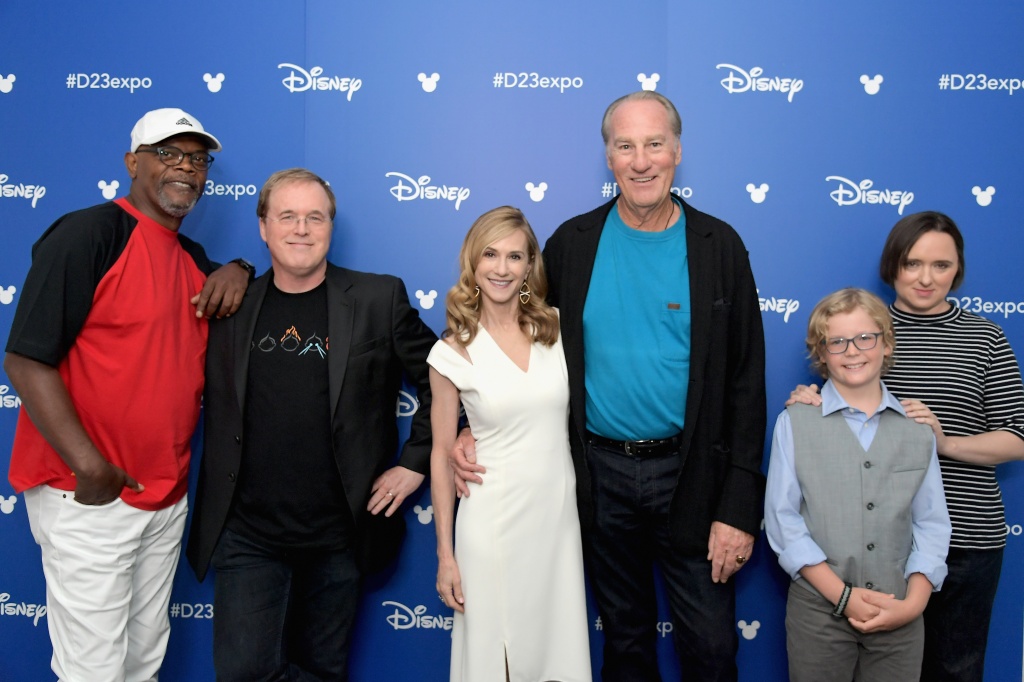 You guys have a great chemistry. Were you able to improv or bring anything to the table when you were doing the recording?

Holly Hunter:   No, this is the gift of Brad Bird. This is what Brad can do that’s so phenomenal.  When Brad cast the Incredibles, the original one, he didn’t go down a list of actors and actress who were like the hot names of that moment.  He had in mind these- the sound of the movie; the sound of the characters together, and in that, Brad had a chemistry in mind that was audio, because that’s the kind of guy that he is; that’s the kind of artist that he is. So Craig and I never met each other until about nine months ago.

That’s the first time that we met each other, so that chemistry is inherent in us, in Sarah Vowell who plays Violet, and Sam Jackson who’s Frozone, with Mr. Incredible –  that’s Brad putting it together before, he ever knew us. His imagination was at work putting the chemistry together. 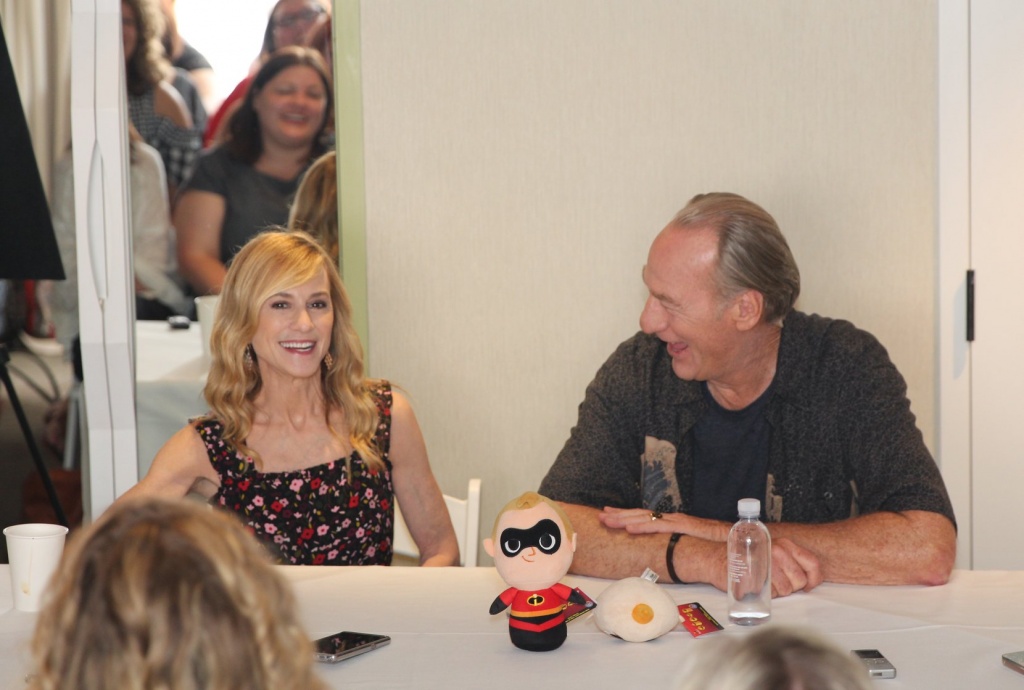 Can you all speak to the role-reversal storyline, especially in light of the climate that’s in Hollywood right now?

Holly Hunter:   Well, I think that’s a little serendipitous, that the Me Too movement coincides with the opening of this movie where that’s an element, but I think that Brad in no way ever meant that – it was totally by coincidence. And at the same time, it is in the air. I mean, it’s in the cultural environment that I guess we’re all breathing.

Which it’s a great thing for kids to see this movie, not just little girls but boys, too. It’s great for everybody to see what men and women are capable of, that men are capable of being fantastic, nurturing parents.

And it’s fantastic and delightful to see Elastigirl living up to this gift that she has without any apology. She just is going for it, and losing herself in it, which is a beautiful thing. I think also for mothers, it’s great for a mother to be able to be fully engaged in something that has nothing to do with parenting, and I think that’s difficult for all of us to actually give ourselves license to just go that deeply.

Craig T. Nelson: From the same standpoint, it’s incumbent to understand a great part about the character in the film, for me, was that I was given the opportunity to get to know my kids.  Elastigirl and Mr. Incredible are competitive, and they have this kind of, ‘go ahead and do it, and when you do it, do it well like I know you can do it, but when you fail, you know, I’ll be there.’ 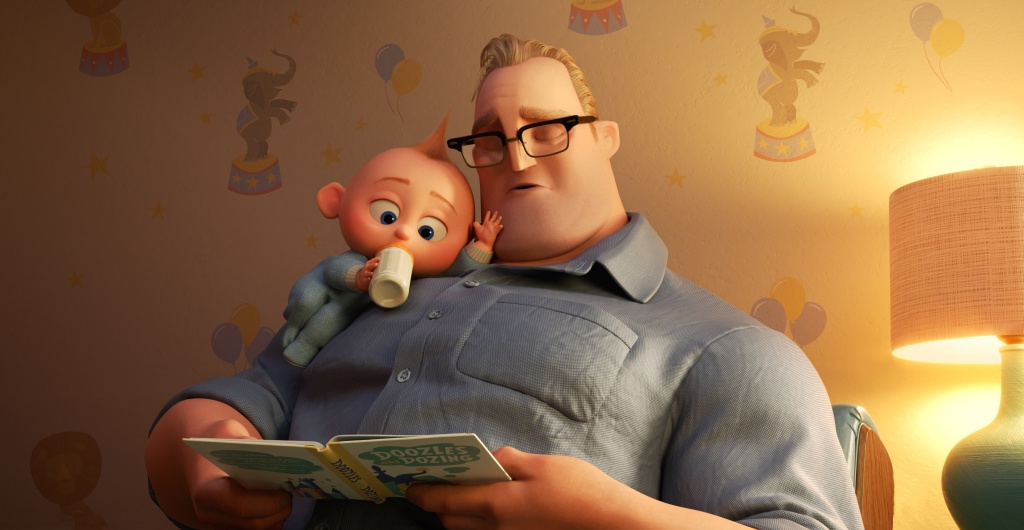 Interviewing Craig T. Nelson and Holy Hunter was so much fun.  As you can see, they worked well off one another – it’s unbelievable to think they never actually worked with each other on the film.  What a delight to get to meet & interview them! 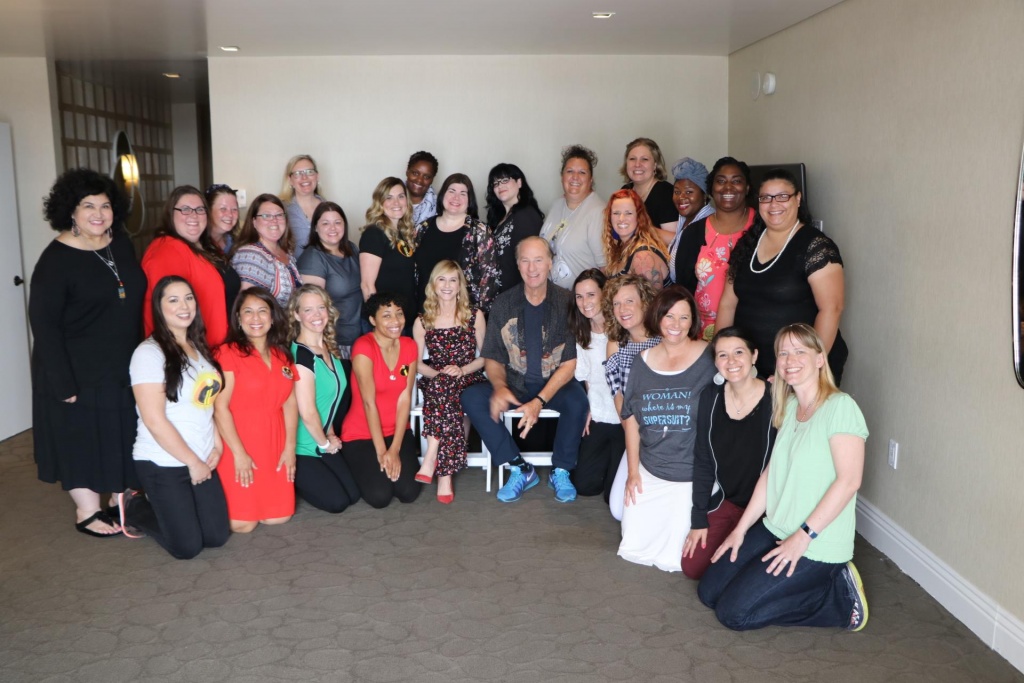 This movie was, for lack of a better word, INCREDIBLE – full of laughs, tender family moments, and edge-of-your seat fun.  It is truly a great movie for the whole family to see and perfect for Father’s Day.  I can’t wait to tell you more about it – stay tuned for my review on Friday, June 15 – but in the meantime, make sure you have grabbed your tickets now! 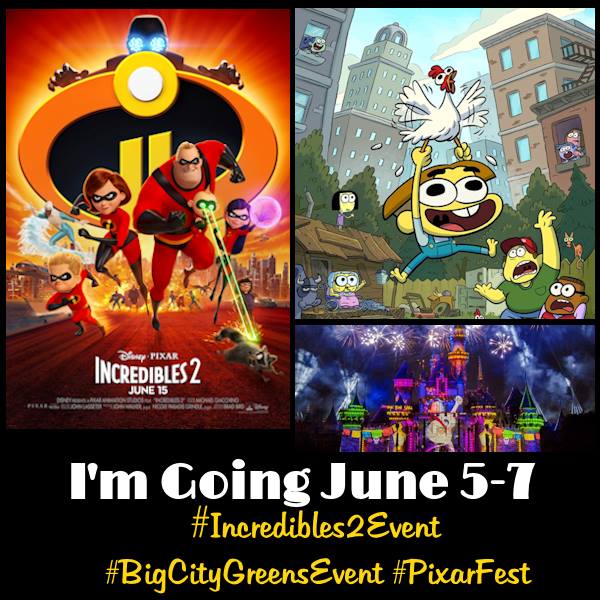 Incredibles 2 and Pixar Fest? What an INCREDIBLE Trip! 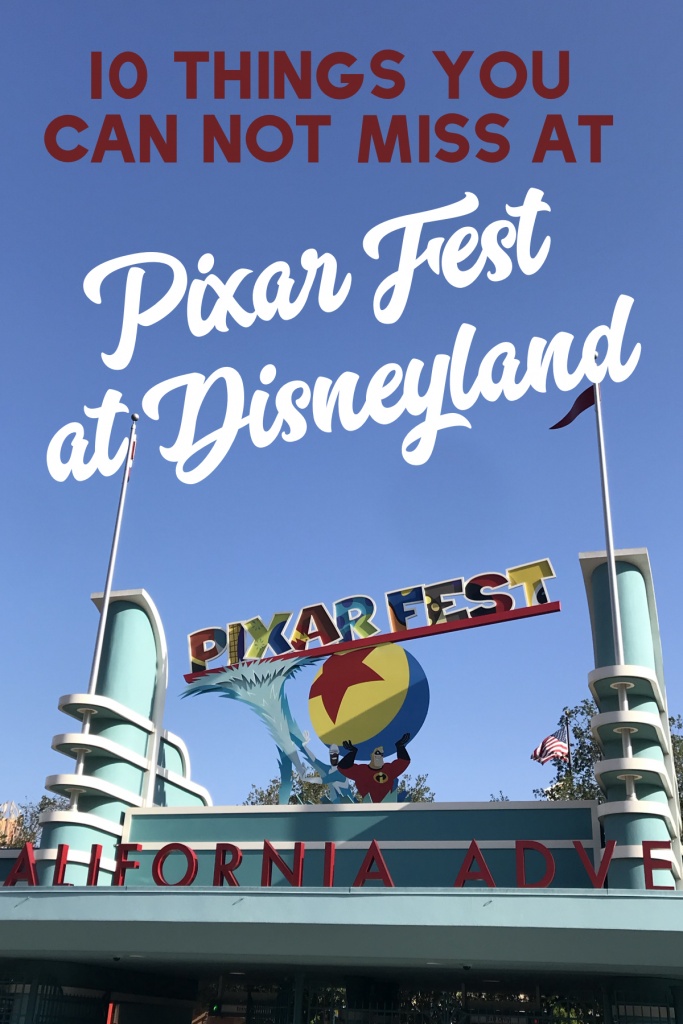 10 Things You Can Not Miss at Pixar Fest at Disneyland

Disclosure: I was invited to attend the Incredibles 2 Press Junket by Disney in return for my review of Incredibles 2. All opinions are my own.