While at the Guardians of the Galaxy Vol 2 Press Junket in Los Angeles, which included the Red Carpet Premiere of the movie, we had the fun opportunity to interview the cast of Disney Channel’s Descendants 2.  The highly-anticipated sequel to Descendants, this movie is set to come out this summer.  In there meantime, here’s some fun facts we found out about it!

One of the most popular films in my house in 2015 was the Disney Channel’s Descendants.  My daughter was obsessed – it was on all the time.  But I have to admit, even I fell for it. It was the perfect movie for tweens & teens – especially those that grew up loving Disney Princesses.   And for this mom, who is a BIG Kenny Ortega fan – hello Dirty Dancing anyone? – I loved all the songs.  So our house was super excited to see that Descendants 2 was coming out this summer!

While in Los Angeles for Guardians of the Galaxy Vol 2, we spent a few hours with the dynamic cast & creators of Descendants 2.  It was a really amazing morning as we saw scenes, heard from the creators and interviewed all of the VK’s – Dove Cameron (“Mal”), Sofia Carson (“Evie”), BooBoo Stewart (“Jay”), Cameron Boyce (“Carlos”), and newcomer China Anne Stewart (“Uma”) . I’m thrilled to be sharing my interviews as we get closer to the premiere date, but for now, I have a few juicy tidbits for all you Descendants fans!

DESCENDANTS 2 SPOLIER #1: When Does it Premiere?

It was exciting to be the first audience to screen a few important scenes of the movie and hear about what went into filming these scenes.  Even the brief bits we saw made me really excited to see the whole movie.    In fact, if you want to see the world premiere of the Ways to Be Wicked music video, it’s airing tonight on the Radio Disney Music Awards on the Disney Channel. Here is a peek:

While in LA for the Guardians of the Galaxy World Premiere, we spent a full morning learning more about Descendants 2 and while I can’t reveal much of what i learned that morning, I can tell you that the scenes that we saw were really good.  Here’s what we do know about the story:

The Descendants sequel will once again follow the story of the VKs (Villain Kids) Mal, Evie, Carlos, and Jay, as they try to find where they belong in Auradon. Mal, tired of being pressured into being royal, quickly returns to the Isle of the Lost, looking to go back to her more rotten roots.  Only, there’s a new queen in charge as Uma, Ursula’ daughter and Mal’s nemesis, has taken over the island with her pirate gang — which includes Captain Hook’s son Harry, and Gaston’s son Gil. 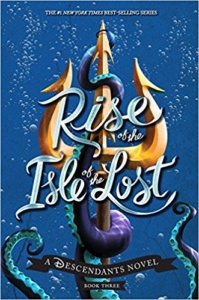 The Descendants 2 Soundtrack will be released on July 21, same day as the premiere. We were able to hear 3 songs from the movie – “Ways to Be Wicked”, “What’s My Name”, & “It’s Going Down” – all were really great, catchy and fun.

Here is the entire songlist from the album:

Other Articles from the Guardians of the Galaxy Vol 2 Event you may enjoy:

Disclaimer: Disney sent me to Los Angeles on an all-expenses paid press trip, in exchange for my coverage of the red carpet premiere of Guardians of the Galaxy Vol 2. All opinions are my own.