Want to go behind the scenes in a place that is so secret, that we were never told the actual location we were visiting?  Come with me for an exclusive tour of Disney’s Animation Research Library and see some original artwork from Peter Pan, a movie that celebrates it’s 65th Anniversary this year.  Make sure you pick up your copy of the film on June 5!

“We haven’t pulled this many pieces from Peter Pan ever before.”

That was first thing our tour guide said to us as we walked into the first room of our private tour of the Disney Animation Research Library. In honor of Disney’s Peter Pan’s 65th Anniversary, we had the special invitation of a tour to see some of the original artwork from this classic movie.  Every movie, cartoon, still, image and more that was done at Walt Disney Animation Studios is stored here at the ARL. That’s over 65 million pieces of art from the 1920’s to the present day.  And we were about to see some of it.

They call some parts of the ARL, the “Morgue”, it’s actually a living facility, not where animation goes to die but where it can be stored, so that everyone in the company can learn and be inspired from it. Not a lot of other studios held onto their art work, so the ARL is also considered “Disney’s Secret Weapon.” As you will see, there is a lot of care and consideration taken with all of these pieces, which goes to show how important it is to the Walt Disney Company to take care of this legacy.

The public is rarely invited in, so I knew this was going to be a very special and very memorable tour.

We gave a nod to Walt as we heading into the ARL.  He’s pictured here in the original morgue as he was hosting an episode of the Disneyland television show “Venturing Wild with Heart.” And if you look really carefully, you can see the sign for Peter Pan in the photo.

As we gathered around the big table, you could feel the historical reverence in the room.  On top of it lay dozens of stills from Peter Pan, the actual artwork that inspired and was created for the movie in 1953.

And did you know, the studio had actually started trying to work on Peter Pan in the late 1930’s before World War II?  They had an artist by the name of David Hall who was actually painting a lot of story-sketch-panels.  But he only worked for the studio for 13 months, between May 1939 and June 1940 and  then they shelved the project until after the war.

An example of David Hall’s pre-WWII work on Peter Pan.

After the war, Mary Blair, was Walt Disney’s favorite animator at the time, was brought onto the project. It is actually her visual style that was very crucial in the look of the film, the use of the colors, the juxtaposition and opposition of colors, and the use of simple shapes,  so it became a much more different look. With the pieces on the table side by side, it looked very different.

Here is some of the artwork we saw that day:

These are layout thumbnails that help the artists visualize what you would see in the frame in the film. So the artist would take the story sketches to determine what the camera moves would be. Above is the scene where they are flying off to London, getting ready to “Here we go” and they launch off of the clock tower.  These thumbnails will show how the camera would tilt, rotate and pan across until they are flying over London.

It was amazing to see the collection of artwork that showed the different processes in making an animated feature. We saw the story process, the animation process, the back-ground paintings, layouts and concept art and the rough drawings of several characters, such as Tinkerbell and Captain Hook.

Now that you have seen some of these amazing pieces of art, it makes you want to watch the film again, doesn’t it?

Make sure to pick up your copy of the Walt Disney Signature Collection Edition of Peter Pan for it’s 65th Anniversary.  The digital download is available today and the Blu-ray is out June 5, 2018. 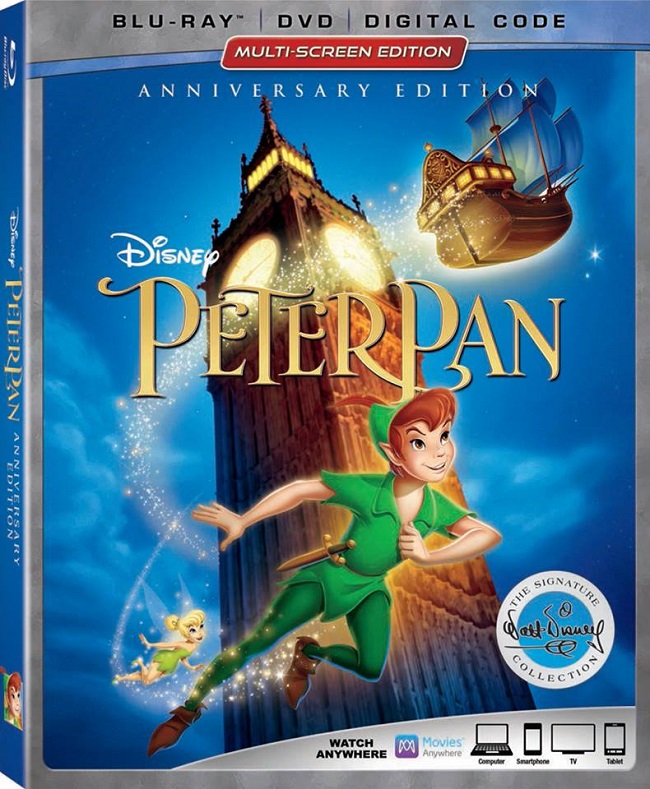 Disclaimer: Disney sent me to Los Angeles on an all-expenses paid press trip, in exchange for my coverage of our time learning about the 65th Anniversary of Peter Pan. All opinions are my own.