You are here: Home / Disney / Highlights from the Red Carpet Premiere of The Good Dinosaur #GoodDinoEvent
Spread the love

This past week I was invited out to Los Angeles by Disney to cover the Red Carpet premiere of Disney Pixar’s The Good Dinosaur.  Read on to hear about the red carpet experience, the movie premiere and the after party. And my experience meeting a few stars!

Let’s talk Bucket-list Experiences.  I’m talking those experiences that create memories that will stay with you forever.  For some, it’s a thrill-ride like jumping out of an airplane or seeing the Great Wall of China.  I’ve always wanted to travel Europe by train for 6 weeks.  It will happen.

This past week, I had a bucket-list experience that I will remember for the rest of my life.  I walked the red carpet for the movie premiere of Disney Pixar’s The Good Dinosaur. But it wasn’t just “walking” it that I will hold dear, it was being a part of the evening – casually meeting stars of the movie and having a relaxed conversation with them, watching the movie with the creators, producers, directors and stars of the movie in the historic El Capitan Theatre and attending the exclusive after-party that made this experience a one-of-a-kind.

The premiere of The Good Dinosaur was held in Walt Disney Studio’s premiere cinema, the legendary El Capitan Theatre on Hollywood Boulevard. This gorgeous theatre was built in 1926 and has held countless movie premieres, including “Citizen Kane”.  In 1989, it underwent a major restoration, updating it back to it’s original look. Can you just imagine the history this theatre has seen? 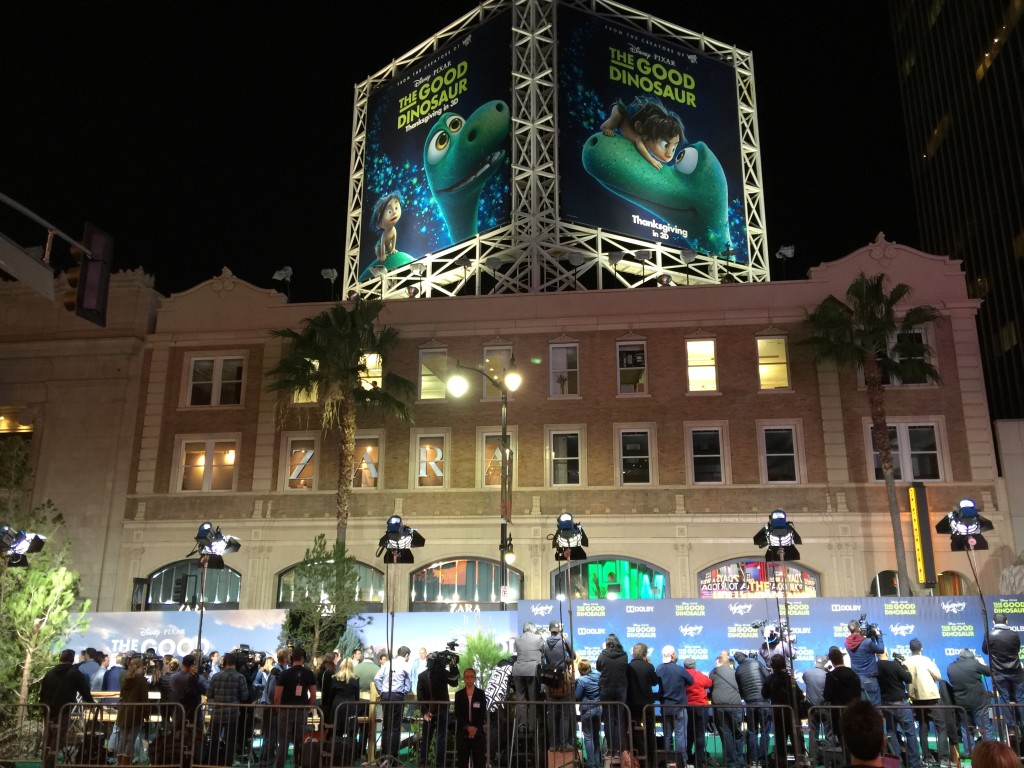 The entire street is closed and the walk-up to the theatre is beautifully decorated in the landscape of the movie.  One side of the street is filled with reporters there to interview the talent and the other side has several step & repeats for photo opportunities.  We were allowed to just mingle around with everyone for a while, snap some photos, and meet some stars. 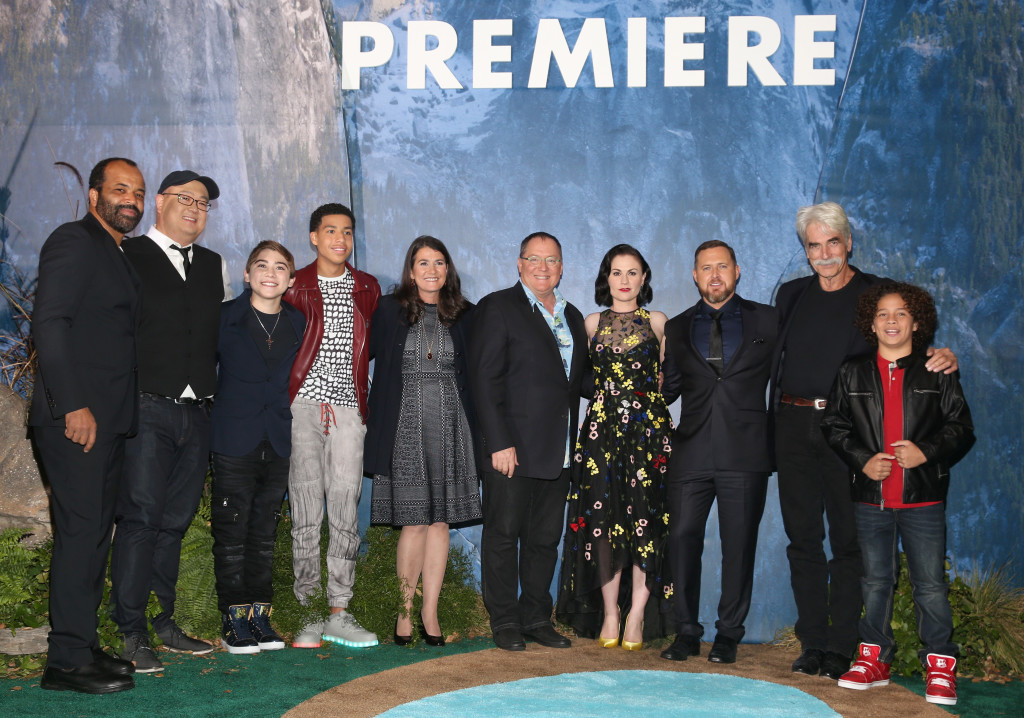 Several stars of the movie made their way through the crowd, including Anna Paquin (voice of Marley), Sam Elliott (voice of Butch), Raymond Ochoa (voice of Arlo) and Marcus Scribner (voice of Buck).

And then there were other actors that had been invited to the premiere – Mario Lopez,  Ian Ziering, & Weird Al Yankovic are a few we mingled with.

We literally bumped into Yara Shahidi (Zoey Johnson on Black-ish) and ended up talking to her for a few minutes about her show and supporting her “brother” in his role in The Good Dinosaur.  She was precious y’all.

While standing there, Marcus Scribner’s family came up to us and thanked us for speaking with their son the day before.  For reals – they were so appreciative of the support that their son had received from the mom blogging community, that we were “real people who are not jaded by the industry.” Quite frankly, they are the ones who are “real”.  And we went on to have a great conversation about raising kids in Los Angeles and in the entertainment industry.

While we were visiting with them, Marcus & Raymond both walked up to show his parents their shoes – just regular kids, excited about their “light up” shoes.  These were pretty cool shoes y’all.

The El Capitan Theatre was beautifully decorated for the movie with greenery & trees. And as we were escorted to our seats, we were entertained by a gentleman playing Disney hits on a giant 4/37 Wurlitzer organ (four keyboards and 37 ranks of pipes).  The El Capitan’s “Mighty Wurlitzer” was built in the 1920s and plays before every premiere.  It was a treat to get to hear it.

The organ gets whisked away (actually, it’s lowered under the stage), the curtains part, and the movie begins.  As you know, every Pixar film begins with a short and The Good Dinosaur opened with Sanjay’s Super Team – an amazing short about a boy and his Dad truly seeing each other for the first time.  I can’t wait to tell you more about Sanjay’s Super Team and our interview with the creator & producer next week.

The Good Dinosaur opens with thunderous applause as the title screen is shown.  The energy was alive in the theater, everyone anxious to see the finished product.  I loved watching the movie with the premiere crowd, as people laughed and cheered and clapped throughout the movie – it was unlike any movie theater experience I had ever had.

The Good Dinosaur After Party

Not only did we get the chance to walk the red carpet, we were invited to the after party at the OHM Nightclub across the street from the El Capitan. As we were walking per singer Lisa Loeb starting chatting with us about the movie (she was there with her almost 6 year old) and what age is the best to start talking kids to movies. You know, normal talk. With a grammy-nominated singer & actress. Real people y’all.  Real people.

The nightclub was set up to look like we were sitting around a campfire and the food and drinks matched. It was very family friendly with a fun photo booth, crafts and Disney Infinity 3.0 set up to play.  We enjoyed the food and the atmosphere and of course, the people as we had conversations with Anna Paquin, A.J. Buckley, and a few up & coming Disney teen stars. And more conversations with teens’ parents – all of whom are very proud of their children’s success but working hard to make sure their kids remain grounded.  As a parent, I found that very refreshing. 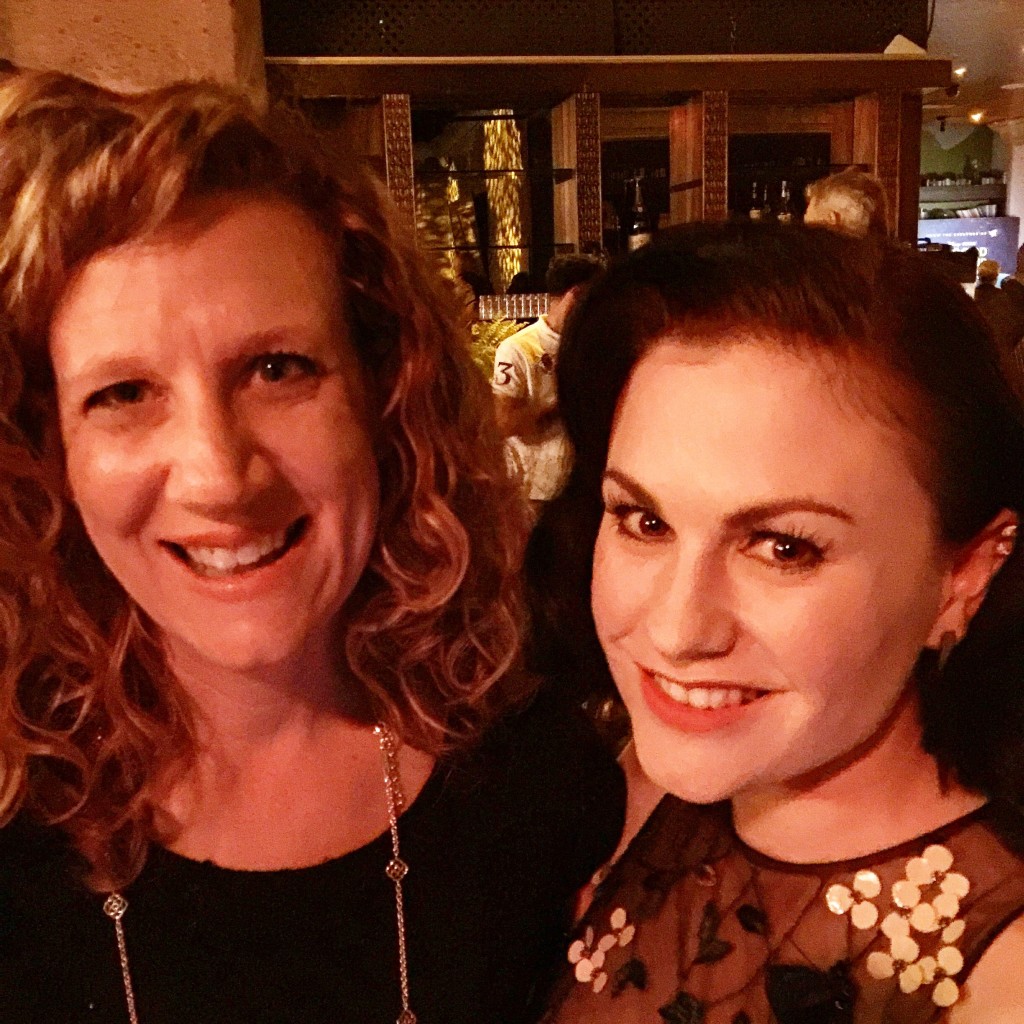 The whole night was just surreal.  I enjoyed being a part of all the festivities but the real memories come from the conversations with the “real people” I had all night.  I have always been drawn to the Hollywood and entertainment business, and to have the opportunity to interact with so many in the industry, put pretenses away and see them as themselves was really cool.

The Good Dinosaur opens in theaters on November 25 and it’s the perfect movie to see with the entire family over the Thanksgiving holiday.

Check out more of the fun we had on the #GoodDinoEvent press trip:

Disclaimer: Disney sent me to Los Angeles on an all-expenses paid press trip, in exchange for my coverage of the red carpet premiere of The Good Dinosaur. All opinions are my own.