In the Heights at ZACH Theatre runs from May 30 thru July 2, 2017. We had a chance to see the production last week and it is so well done – a great way to start summer!

I didn’t know much about In the Heights before seeing it at ZACH Theatre last weekend.  And that was purposeful. As a huge Hamilton fan, you would have thought I would have already downloaded the soundtrack to In the Heights and had half the album memorize.  After all, every thing Lin Manual-Miranda touches is gold in my book.  But after listening to Hamilton and knowing the story before ever seeing it on stage, I decided I wanted to see the shows and experience them first hand from now on.

And when I learned that ZACH Theatre would be doing In the Heights last fall, I knew this was my chance to see it in person – and not give away the story ahead of time. So walking into the theatre, we knew nothing about the show other than it had earned Miranda his first Tony Award for best Musical and best Original Score in 2008.

As a longtime fan of ZACH Theatre, I rarely see a show there I don’t like.  And In the Heights was no disappointment. We were both amazed by the songs & choreography and moved by the story.

In the Heights tells the story of life in Washington Heights in New York City. There are the little stories,  like Usnavi, the owner of the corner story and his quest to win Vanessa’s heart.  Or Nina, who had to quit college and move back home.  But it’s the overarching theme of family and being proud of where you come from that really moves the audience.

The music is catchy and delightful – from the moment the opening number begins, you can hear the influence and impression Miranda has had on his first musical.  The way he carefully interweaves rap music, catchy melodies, and heart-aching ballads is unlike any composer.  And it is beautifully done in this show.

But even the best music couldn’t make a show without the amazing performers that pull these characters to life and make us care about them.  In his Austin premiere, Keith Contreras-McDonald (Usnavi) endears us to his character and the neighborhood he loves and he effortlessly raps out his passion for his neighborhood.  Cristina Oeschger (Nina), Alicia Taylor Tomasko (Vanessa), and Theresa Medina (Abuela Claudia) blew us away with their spectacular voices. 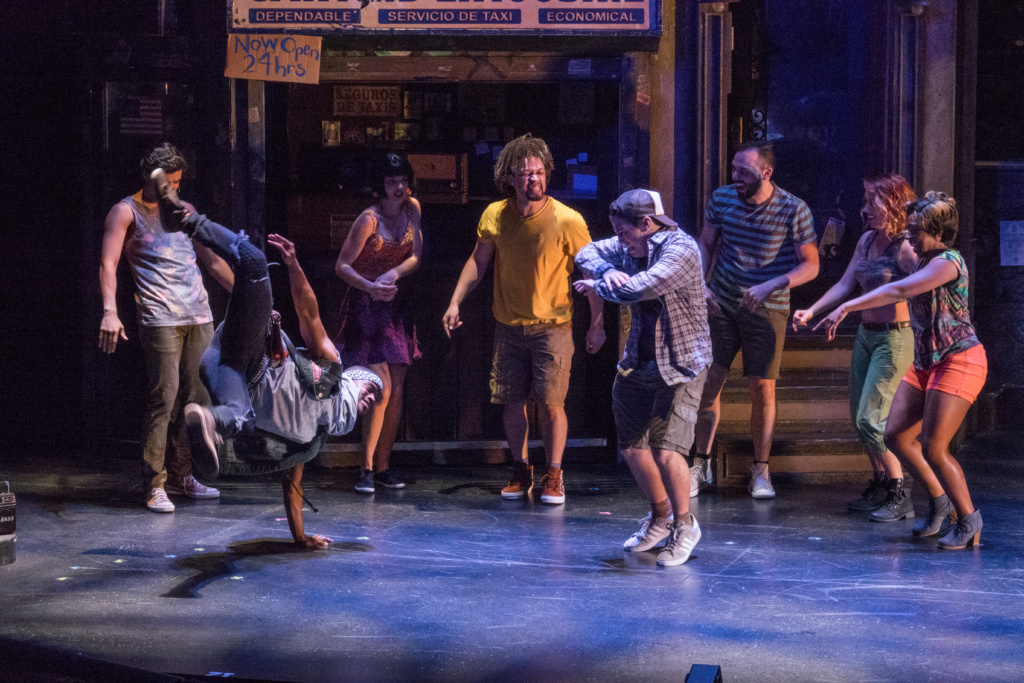 The choreography is explosive with so much to see, I honestly want to see the show again to make sure I catch everything.

I love Broadway shows and I honestly love the production of ZACH Theatre’s shows, especially big ones like this.  I love how intimate Topfer Theater is, how you can see the expressions on each performer’s face, no matter what seat you have in the house. I think we are incredibly blessed to have such a talented company in Austin.

In the Heights is another of many great performances I have seen at ZACH.  If you are a fan of Miranda and Hamilton, In the Heights is an absolute must see.  Going back to how I began this review – I knew nothing about the show other than Miranda had written it.  And I was so overwhelmed with the story, the music, and the performance – it was exactly how I wanted to experience it.  And you should too.

In the Heights at ZACH Theatre

Tickets start at $25 and are available online at zachtheatre.org, by phone at 512-476-0541 ext. 1, or in person at the ZACH Theatre Box Office, in the Topfer Theatre, 202 South Lamar Blvd. (corner of Riverside Drive and South Lamar BlMd.) Monday through Saturday, noon – 5 p.m. ZACH Theatre is wheelchair accessible. Discounts are available for groups of 8 or more. Student Rush Tickets are $18 one hour before show time (with valid ID).