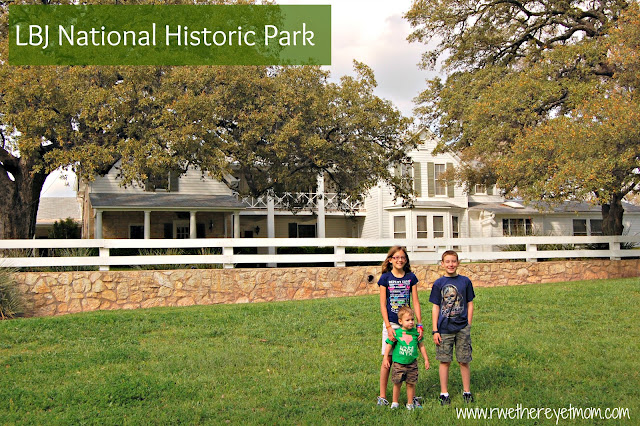 There is a treasure in the Hill Country of Texas.  A true historical treasure.

Lyndon B. Johnson, the 36th president of the United States, was born & raised in the Hill Country of Texas.  Having lived and gone to school in the small town of Johnson City, founded by his family in the 1870’s, President Johnson continued to return to the area throughout his life.  In 1951, he purchased the 1500 acre ranch that was owned by his widowed aunt and it soon became known as “LBJ Ranch”.

The Johnson’s spent a great deal of time here, 25% of his Presidency was at the “Texas White House”.  And once he retired, he lived on the ranch full time until his death in 1973.

In 1972, President Lyndon B Johnson donated all this land to us, and thousands enjoy this park every year.  As much as we love history, I kick myself for not visiting the Ranch sooner! There is so much to do & see here.

You must first stop at the Visitor’s Center to obtain a pass to enter the park.  There is a audio CD that provides you with a wonderfully narrated self-guided tour of the Ranch – I highly recommend you take the tour with the CD to hear all the colorful stories. 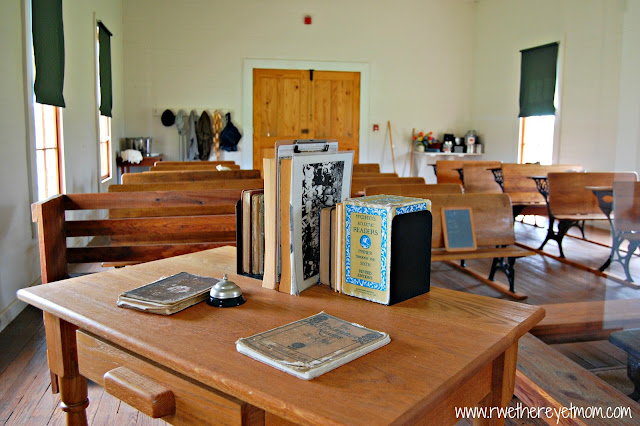 One of the first stops on the tour takes you to the Junction School.  LBJ only spent a small amount of time at this particular school, though he came back as President to sign an education bill into law here.  The school is set up the way it was when a 4 year old Lyndon had attended for just one year. 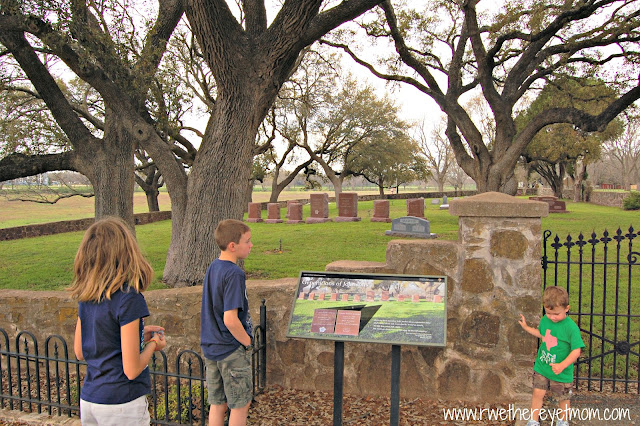 Winding along the Pedernales River, you will pass LBJ’s reconstructed birthplace and the family cemetery. 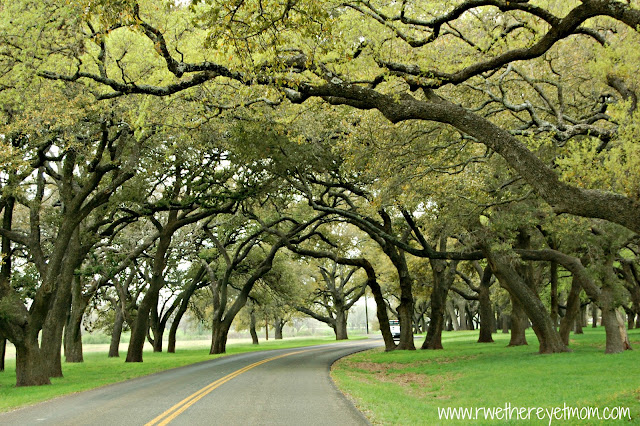 As the CD provides you with stories of his time and music from his era, you can’t help but slowly be taken back in time, to the relaxing pace of a Texas Hill Country ranch. 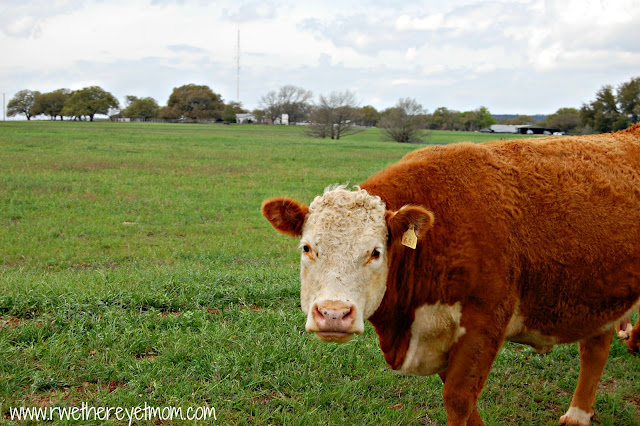 Especially as you pass right by these beautiful Hereford cattle.  Did you know that LBJ was actively involved in running a cattle operation?  And still does today, as the tour takes you to his prized show barn where you can meet some of these gorgeous animals up close. 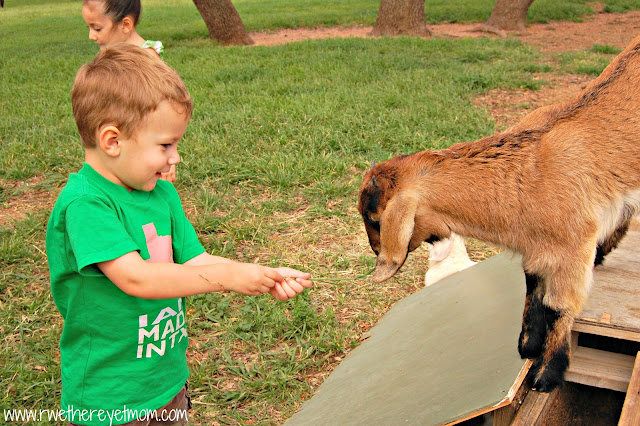 You can talk to some of the ranchers that keep the cattle operation alive today – one told us stories of how President Johnson would bring guests directly from their plane to the show barn and proudly show his cattle to visiting dignitaries before allowing them to settle in for their stay.

We also spent some time playing with these 10 day old goats – so fun! 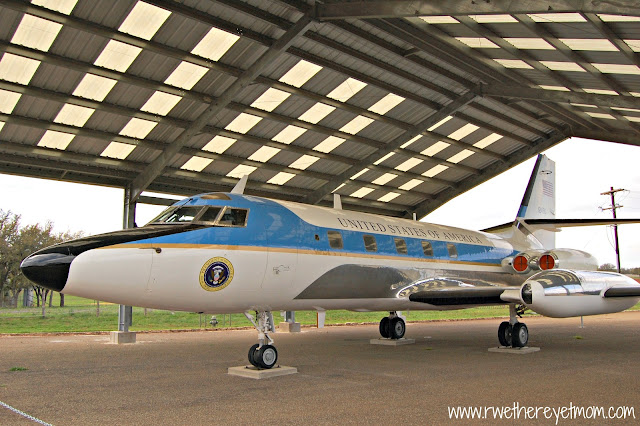 Moving on down to the house, you drive past the airstrip where the President would be flown in on this smaller plane, which he affectionally called “Air Force One-Half”. 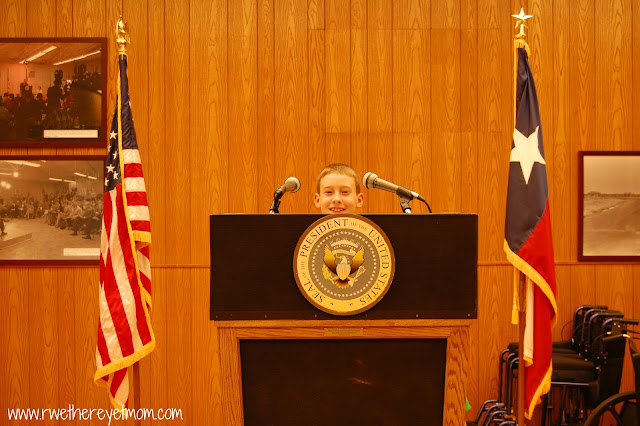 In the hanger, you can stand right on the spot where President Johnson held many important press conferences. 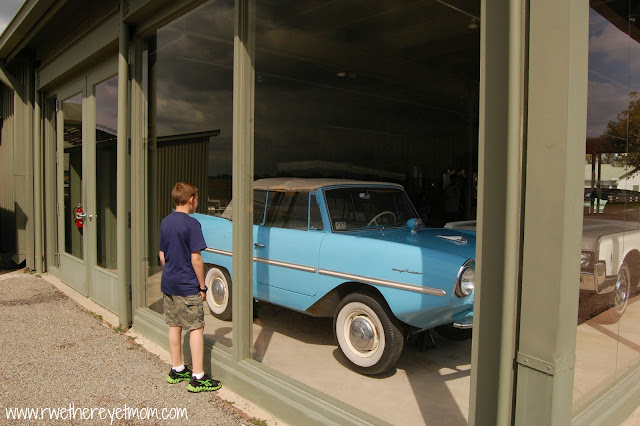 You can also check out the Johnson’s collection of cars, including this funny on that can be driven in water to become a boat.  President Johnson loved to take visitors for rides in this car, pretend the brakes had gone out before splashing into the river, only to become a boat.  It was fun stories like these that brought LBJ Ranch to life.

While the Ranch tour is free, there is a small admission fee to tour The Texas White House.  Having just opened to the public in 2008, only a few rooms are available to walk through, though more are opening up as time goes on.  Park Rangers are stationed throughout the house and will answer any questions you have and provide you with the history of the rooms or the unique objects in the rooms.

When we visited in March, we were able to see LBJ’s office, as it was in the late 1960’s.  A Park Ranger showed us where he was when he made that very difficult decision to enter into the Vietnam War, and the position he was in knowing his daughter’s new husband would very likely be drafted as well.  We walked though sitting rooms filled with amazing gifts from his time as President.  And we walked through both LBJ’s and Lady Bird’s bedrooms, both set up to reflect the era.  Honestly, you could feel the history seeping in these rooms. 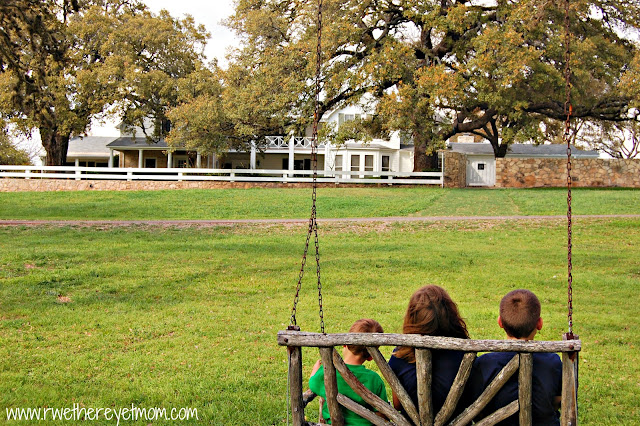 Having gone non-stop throughout the day, the kids and I enjoyed a slow swing on the front lawn of the Texas White House.  There was a beautiful breeze to our warm sunny day.  And we enjoyed the relaxing moment on this gorgeous Texas Ranch.  As we learned on the tour, President LBJ loved to sit by the banks of the Pedernales River, just like we were here.  Maybe my children do not understand the significance of the opportunity to see all this history up close and personal right now, but one day they will.
The Lyndon B Johnson National Historic Park has two visitor areas in 2 separate locations.  The Johnson Settlement & Boyhood Home are located in Johnson City.  The LBJ ranch is 14 miles away near Stonewall.
More Fun Things to do in the Hill Country:
Sauer-Beckmann Living History Farm
Longhorn Caverns State Park
Inks Lake State Park
National Museum of the Pacific War
Enchanted Rock
Vanishing Texas River Cruise
Sweetberry Farm in the Fall
Picking Strawberries at the Sweetberry Farm
BlueBonnet Cafe
Salt Lick BBQ
Texas Travel Facts for LBJ Ranch at Lyndon B. Johnson National Historic Park:
Location: Highway 290 Stonewall, Texas
Hours: Self-guided driving tours are available starting at 9 am seven days a week; Guided tours of the Texas White House are offered 10 am to 4:30 pm
Admission: Driving permits for the LBJ Ranch are free.
$2.00 fee to tour the Texas White House
Recommended Time: 2-4 hours
Good to know: Good for all ages, though my toddler was not wanting to take time to look through the houses; Gift shop is available at the Visitor’s Center and the Texas White House; plan a full day as you can visit the Sauer-Beckmann living history farm as well
Website: http://www.nps.gov/lyjo/planyourvisit/visitlbjranch.htm