If you haven’t made your spring break plans yet, you might want to consider a trip to SeaWorld San Antonio! The park has got some new events, shows, and rides that you won’t want to miss. 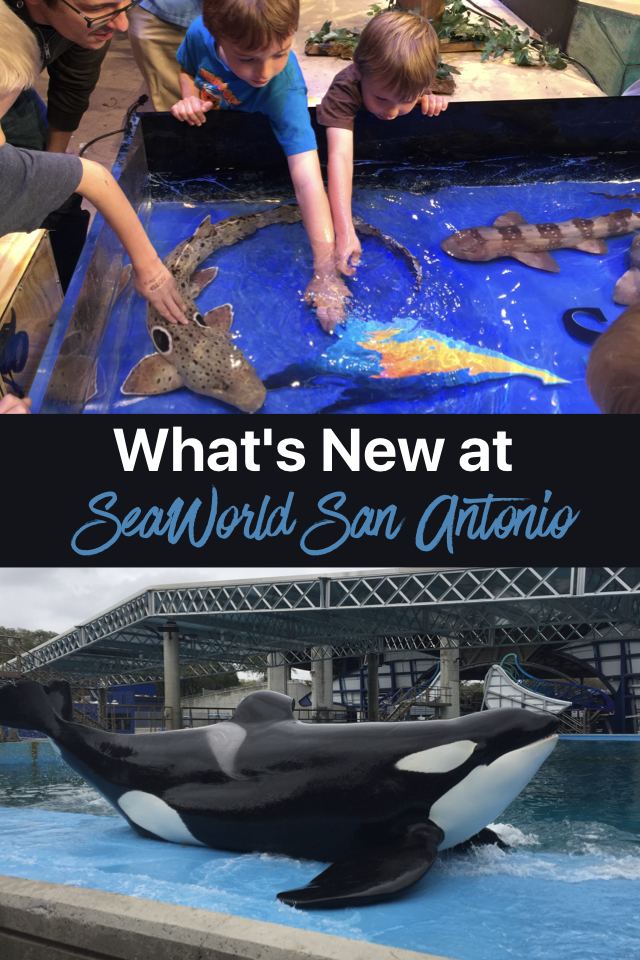 Our day started with Dine with Shamu. This dining experience is a unique opportunity to have a meal right next to killer whales! The all-you-can-eat-buffet was delicious but the best part was getting to be so up close with whales and their trainers. The trainers are great at going around and answering everyone’s questions. My sons asked how fast they are (they can swim 30 miles per hour) and how strong they are (they can throw toys that weigh 100 pounds up into the air for fun).

After our meal, the trainers and killer whales (which are actually dolphins- who knew?!) demonstrated their skills during an educational performance. We learned all about the killer whales and their behaviors. I was very impressed and relieved to learn that SeaWorld is focusing less on their animals doing tricks and performing shows, and concentrating more on education, rescue efforts, conservation, and the welfare of animals. They are striving to become the largest marine animal rescue organization in the world.

After lunch, we headed over to the Bayside Stadium for the Lumberjack Challenge. This competition between lumberjacks from both Alaska and Texas was impressive, action-packed, and hilarious. We were lucky enough to have been sitting on the side cheering for Texas (which made my boys so happy). So here’s a tip: if you too would like to be on the Texas side, sit on the right. They split the audience down the middle and the left side cheers for Alaska. We got to see the lumberjacks compete in several events such as tree climbing, log rolling, chopping, sawing, and ax throwing. My boys were so excited that our team won (Go Texas!) and couldn’t wait to meet the lumberjacks after the show and take a picture with them. And because of SeaWorld’s commitment to sustainability, all the wood used in the show is recycled for the animal habitats.

After the Lumberjack Challenge, we had a little bit of time to spare before the next show SeaWorld Live! began, so we decided to go on a ride. The newest roller coaster, Wave Breaker: The Rescue Coaster wasn’t completed when we were there, but we got to see the work in progress. The roller coaster is expected to open this summer, which makes for a good excuse to come back!  Wave Breaker: The Rescue Coaster was designed with a message in mind, and is intended to simulate animal rescue operations. It will feel like you are riding on a jet ski along a 2,600-foot-long track and go over heights of 61 feet! The ride will feature interactive components about SeaWorld’s animal rescue efforts.

Since this ride wasn’t open yet (and my little sons wouldn’t be tall enough to ride it anyway!), we headed over to ride the Shamu Express instead. This ride is perfect for little ones who are at least 38 inches tall.

The next show we got to see was called SeaWorld Live and it featured different rescued animals such as birds, a reindeer, a wart hog, and even a sloth! (The sloth was my favorite.) This show was only offered on March 4 & 5, but the next 3 weekends in March and the entire week of spring break will feature new and different shows. Check out the Wild Days show schedule here. After the show, we were able to go up to the stage and meet some of the animals! My boys just loved touching a real alligator and petting a wart hog (his hair felt like straw!), but their favorite part was getting to feel the sharks. Sharks are my oldest son’s favorite animal.

Then came our favorite part of the whole day. My husband took our four year old over to ride the Shamu Express again, while I took my seven year old down to see the Ocean Discovery show at Beluga Stadium because he couldn’t wait to see the dolphins and beluga whales. We had about 15 minutes until the show started, so we walked down to the very front of the stage (down by the pool) to purchase cotton candy from a vendor.

New at SeaWorld San Antonio: Be in the Show!

All of a sudden, a park employee approached us and asked my son how old he was and if he wanted to be IN THE SHOW ( <— insert gaping mouth emoji)! He was so surprised and excited for this once in a lifetime opportunity! I quickly texted my husband to get back over to us as fast as possible so they could see him in the show. They made it just in time. We all sat together and learned about the dolphins and belugas and pretty soon, the park employee came by and took our son over to the stage. He got to feed a dolphin and pet her and had her do a trick! It was seriously amazing and a cherished experience we will remember forever.

If you would like to get picked to be in this show, I have some tips. Go with only one child. They only pick one child for the show, and I think they look for kids without siblings so that they don’t cause a fight between them. If you have only one child with you, your chances of getting picked are better. Also, the child has to be old enough. The lady who picked my son asked him his age because she said they typically only pick kids age 7-11 years old. Also, get there early and go up front. We got there 15 minutes before the show started and were way up front looking for cotton candy, so we basically came to the right place at the right time without even knowing it!

Our day was absolutely magical and we can’t wait to go back and see everything we didn’t have time to check out. There is so much to see this March at SeaWorld!

More Posts About SeaWorld San Antonio You Might Enjoy

Should I Take My Toddler to SeaWorld?

10 Fun Ways to Get Wet at SeaWorld San Antonio