You are here: Home / Disney / Paul Bettany: How do you go from Vision to a Villain for the Star Wars Franchise?
Spread the love

Two weeks ago, I had the amazing experience to attend the Solo: A Star Wars Story Press Junket in Los Angeles, which included the Red Carpet World Premiere of the movie, as well as interviews with Ron Howard, Woody Harrelson, Alden Ehrenreich and more.  One of the most exciting interviews we had was meeting with the legendary Ron Howard. Here is my time with him.

Actor Paul Bettany (C) attends the world premiere of Solo: A Star Wars Story in Hollywood on May 10, 2018. (Photo by Charley Gallay/Getty Images for Disney)

Paul Bettany has played a variety of characters in films.  From A Knights Tale to Avengers to now Solo: A Star Wars Story, his ability to create memorable characters is amazing.  And Bettany’s performance as villain Dryden Vos is fun and completely different from the Vison we all know and love, making it that much more fun to watch.

But from the moment Bettany opened his mouth in our interview a few weeks ago, it was just so hard to take Vision out of my mind.  His voice is just that distinct. But don’t worry, he soon had us all laughing at the stories he told us about how he became a part of the Star Wars franchise and his time on the set.  Bettany quickly puts everyone at ease with his sarcastic wit and soon you forget all about Vision and learn more about Paul the actor. 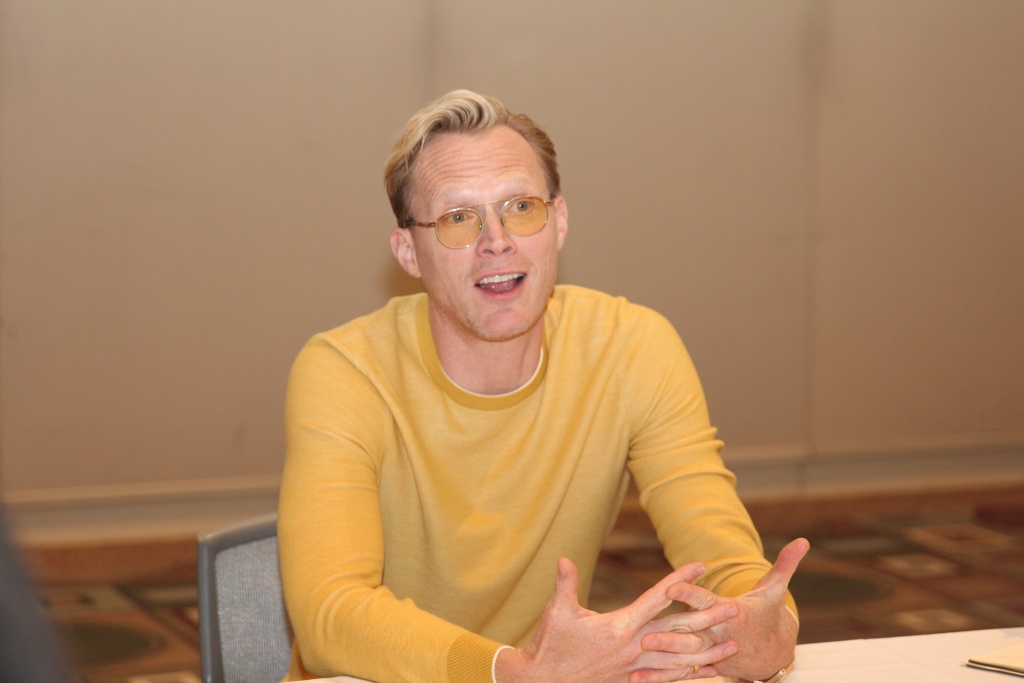 You said before the Star Wars changed your world as a child.  Was there a moment for you on set when you kind of went, oh, my gosh, I’m in a Star Wars movie?

And my first day in fact, was I was on my starship and I was coming down the spiral staircase in a super chic asymmetric cloak.  And an R2 unit went by me with champagne flutes on and I went, oh *&[email protected], I’m in Star Wars.  And that was amazing.

How did you become involved in the project?

This is a hugely embarrassing story which I shouldn’t tell you, but I’ve got to tell you anyway.  In 1977 I saw Star Wars.  I was six years old and it took me out of the gray, miserable 1970’s London.  London was really depressed in the ‘70s,  so, it was just to be taken away to that universe and it was amazing.

So, now I’m in the Avengers & I think there’s no way I’m ever going to be asked to be in Star Wars.  Unless Ron Howard becomes the director.  And that happened.  And so, I literally texted him this,  “Hey, Ron, have you ever spent long winter evenings, like I have wondering why you’re not in the Star Wars franchise?”

That’s a true story.  And he said, you know, give me a moment.  And two weeks later I was flying to London to shoot it.

Ron is as close to family as you get in this business.  He’s put his hand out and helped me out so many times I can’t tell you.  And seeing him be so accomplished and so welcomed in what could potentially have been a very tricky situation for him. He’s just a fine, fine director.  And also, amazingly inclusive and genuinely interested in everybody’s opinions about how things should be.  That’s not to say that he doesn’t have his own vision.  He’s just so confident that he is able to be really open and collaborative.  I think that’s a sign of a really strong leader is when they’re listening.

How do you feel your character ranks with all the other Star Wars villains?

I really wanted to do something very different.  And I felt like I could because the offshoot films, they’re not encumbered with the same set of responsibilities that the main franchise are.  There is the possibility to have a more playful tone.  So, I really wanted to be quite loose with it.  He knows who he is and is super happy about it.  Like, no problems with being bad.  I mean he’s really, really gifted at hurting people.  And he’s like, really okay with it.  That’s really fun to play because you’re just able to sort of close down all the conscious stuff and just be great at torture and murder.

From Vision to Villan

How does it feel to be in two of the biggest movies of the summer in two different universes?

It feels pretty great.  Look, it’s very nice going around the world selling something that people want to buy.

Is it hard jumping from being a superhero to a villain?

No.  I know Vision very well.  By the way, I should also say that Kathleen Kennedy made it okay for me to cross pollinate.  And so, did Kevin Feige – He’s such a huge Star Wars fan.  And but there were times when literally, the makeup crew on Star Wars were finding bits of purple still on me from playing Vision, which doesn’t speak will of my bathing habits.

Do your kids think it’s cooler that you are in Avengers or Star Wars?

Oh, man, I think it’s right down the middle for them.   Well, Avengers have kept us all in shoes for the last (few years).  We’re really feeling how privileged and blessed we all are at the moment.  And it’s been an amazing ride.  My kids are really aware of their privilege because I’m not willing to raise one of those children.  I want them to know how rare this situation is and to prepare them for a life in which they can hopefully, give back in a way that we’ve all received.

As I have said before, Star Wars fans will NOT be disappointed.  Make sure you get your tickets now for this upcoming weekend.  You do not want to miss seeing this movie the weekend it releases!