You are here: Home / Disney / My Thank You to Walt Disney World Cast Members
Spread the love

We just returned home from my 4th trip to Walt Disney World in 6 months – yes, fourth. And I would go back again in a heartbeat. The attractions, the entertainment, and the atmosphere are all very magical and one reason why we love to visit.  But time and time again, it’s the people of Walt Disney World – the Cast Members – that make the trip memorable, and make us want to return.  So this is my thank you to them.

An organization is only as good as it’s people and nothing could be truer than at Disney Parks. Disney’s theme parks are all about managing the guests’ experience. The attitude dates back to Walt Disney himself, who wanted to create a theme park that was different, that would make guests’ days magical. And all these years later, Cast Members of all kinds do their best to make everyone’s day exceptional.

I recently had the opportunity to visit Walt Disney World 4 times in the past 6 months.  I’m not what you would call a “Disney Super fan” – I don’t have a blog dedicated to Disney, I don’t know all the Disney acronyms (ADRs for CM’s at DCR?) and I don’t have even own a pair of Mickey Ears (gasp!).  However, I still find Disney Parks magical and we (meaning every person in my family) love to visit them.

To us, as we walk under the train station and onto Main Street USA, we turn the outside world off a bit and focus on each other & the magic around us. The sounds of cheerful people and the smell of caramel and popcorn as Cinderella’s Castle comes into view puts a big smile on our faces.  And we know we are in for a day of fun.

And at every visit, I am always touched by the kindness of the Cast Members who are there to make my day as magical as possible.  Yes, they have a job to do – but I am always overwhelmed to see them take every interaction a step further.  Walt Disney World Cast Members smile more, talk to you more, and look for opportunities to help make your situation/experience/day even better.  In all the places we have traveled, I have never seen anything like it.

Let me show you what I mean:

My youngest is a big fan of  Star Wars The Force Awakens bad guy, Kylo Ren.  The only thing he talked about while planning our trip to Walt Disney World was to meet Kylo Ren while dressed up as him.  I didn’t know how that would go exactly, but since I knew all the princesses wore their ball gowns to the parks, we thought why not?

Not only did my guy get a reaction out of Kylo, he impressed a few others as well:

Thank you to the amazing Cast Members who took the time to interact with my little Kylo Ren.  It absolutely made his entire trip and he has the best memories of when he “led the Stormtroopers” at Hollywood Studios.

While at Walt Disney World in April, I decided to film a fun “reveal” video for my teenage daughter.  You see, last November, my son & I attempted to do 3 WDW parks in one day and then I took my youngest for a business conference in April.  She was not happy – ok, she pouted – that I wasn’t taking her to WDW this year.  Little did she know, I had been invited to the Disney Social Media Moms Celebration in May and planned to surprise her with a trip.

But would you believe, she broke her leg 5 days before we were supposed to leave?  I had all this footage from our April trip and was able to cheer her up in a special way:

Thank you to all the amazing Cast Members who helped make this video possible.  It was a very special way to surprise her, and as you can see, brought both this mom & daughter to tears.

Broken Foot and all, I rented a wheelchair and we made it to all 4 parks.  We went at a slower pace, but we were able to see and do most everything we wanted to.  And we saw Walt Disney World from a completely new perspective.  Starting with transportation.

The first day at the parks, we walked out of the Beach Club Resort to get on a bus to the Magic Kingdom and a CM immediately came up to us to show us where to line up to wheel onto the bus.  The bus driver was very kind and took his time ensuring she was loaded properly and her wheelchair was strapped in.  My daughter was embarrassed by all the time it took but the CMs were so kind and professional. 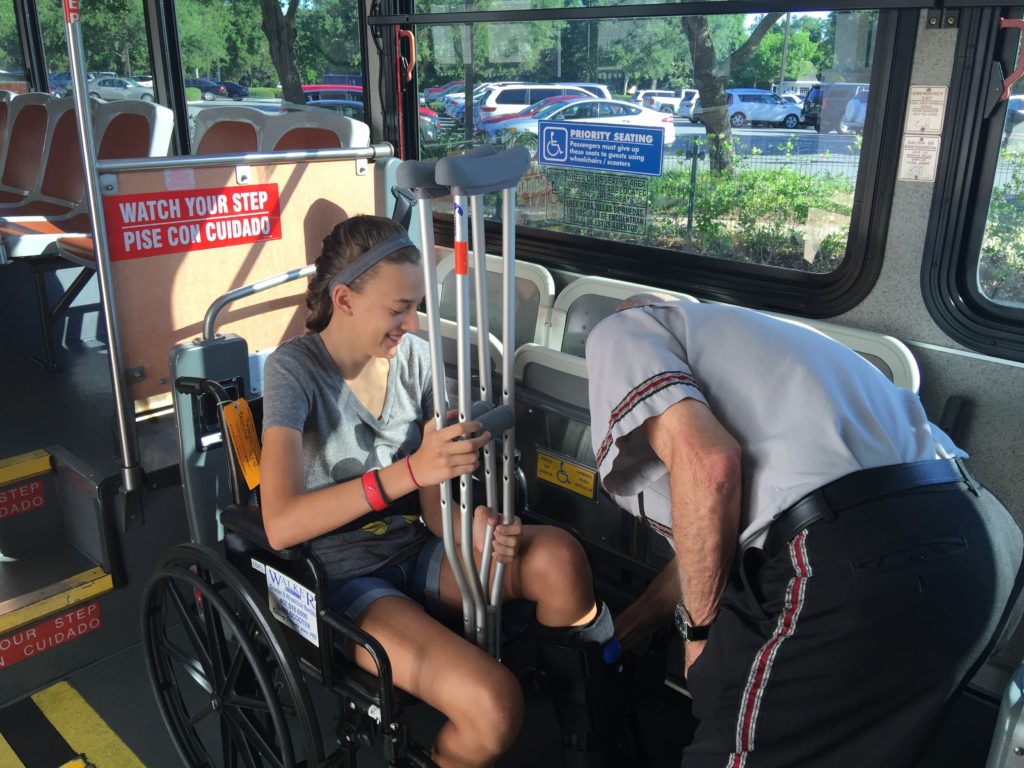 Thank you to all the Walt Disney World transportation Cast Members who showed such compassion & professionalism all week when it came to us riding on your buses and monorails. You are amazing.

On the last ride of the night, the CMs at Disney’s Hollywood Studios Tower of Terror granted us another quick ride, escorting us a back way (an elevator) to the beginning of the ride.  We then were asked – “Are you brave enough to take an elevator ride ALONE?” Um. YES!!! 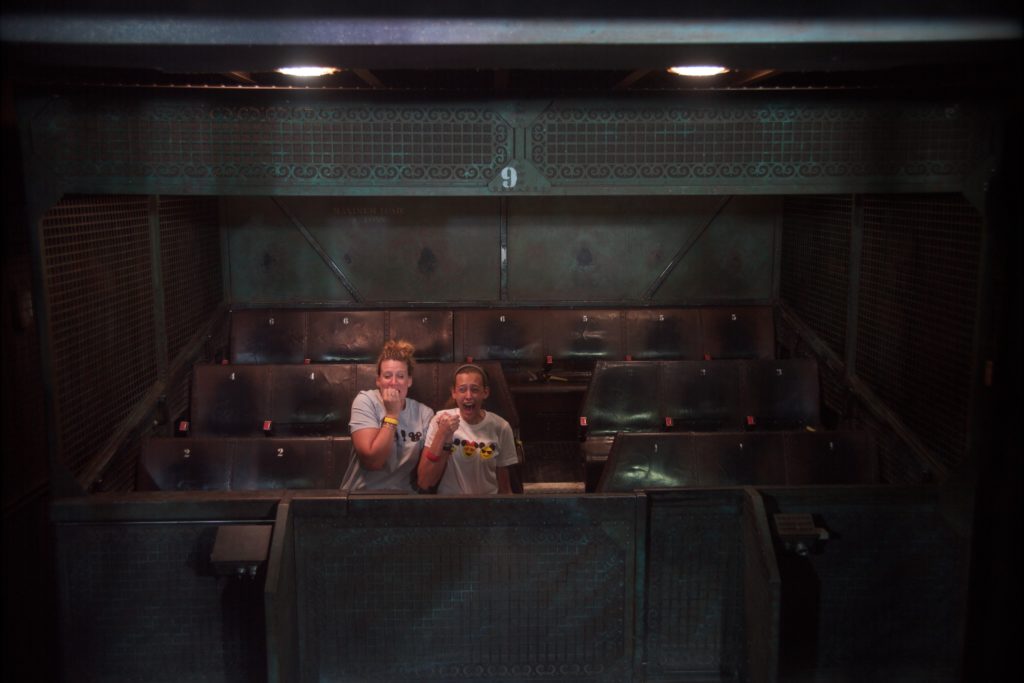 Thank you to the Tower of Terror Cast Members working that night who helped us make one of the coolest mother/daughter memories we will ever have.

Another night, as we walked thru the line for Seven Dwarfs Mine Train at the Magic Kingdom, we struck up a conversation with a CM about how my daughter had broken her foot.  Unbeknownst to us, she was able to put us in the very last car on the train with no one in front of us, allowing us to get these awesome pictures!

Thank you to the Seven Dwarfs Mine Train Cast Members working that night who gave us the back car to rock til our hearts content!

The Magic Kingdom’s signature fireworks show, Wishes,  has always held a special place in my heart.  The very first Walt Disney World trip we took when my oldest was 4, we watched Wishes together and it always makes me tear up.  So it’s a WDW trip must-do for this mom.

After closing down Hollywood Studios, we had time to make it over to Magic Kingdom to see Wishes.  While we were rolling up Main Street USA, Shane, a cast member approached us and asked us if we were from the video.  He then said he had a surprise for us!

Shane took us to a special viewing spot for Wishes that was reserved.  What?! We thought we’d have to watch Wishes in the middle of the crowd, but this wonderful cast member granted us a special “wish” that night. 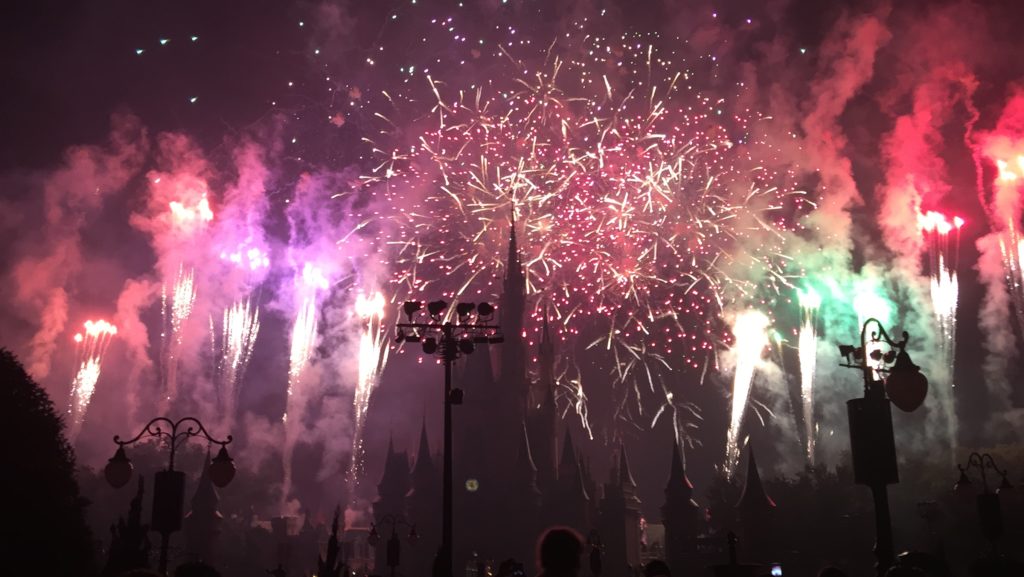 Thank you Shane for spotting us! And then surprising us with such a special treat. We have never watched Wishes in such a great location.  We were awestruck by your gesture and couldn’t thank you enough in person.

One last story – and this one’s incredible.  The very first ride we took on the first day at the parks was a Jungle Cruise in Magic Kingdom. As we waited in line to board, we heard a yell from the skipper of the boat. Y’ALL – it was the SAME Skipper as the one who did our Reveal video!! I kid you not!  It was so cool!!

Later that day, we ran into the Mansion Maid at the Haunted Mansion who was in our reveal video too!  She was thrilled to see us again and even gave us a FastPass as her way of saying thanks for letting her be a part of our fun video! Really??? Amazing.

Thank you Becca & Bree for being so spontaneous to do the video reveal in the first place and then being so excited to see us again!  Your Disney happiness is infectious! Don’t ever lose that enthusiasm.

There is nothing magical about working a job at Walt Disney World.  It’s the people who are magical. and whether they are picking up trash, serving you a meal, assisting you on and off a ride, or behind a mask, the cast members of Walt Disney World exude happiness and love. They are what make the trip to Walt Disney World so magical and memorable.

Disclosure: I was invited to attend the Disney Social Media Moms Conference and was provided with lodging & park tickets at a discounted price.  I was not compensated for this post.  All opinions are my own.