Can I tell you how excited I am that so many of you are linking up for Friday Daydreamin???  So happy – thank you guys all for participating – this Friday will be another post, so join it – super easy fun! 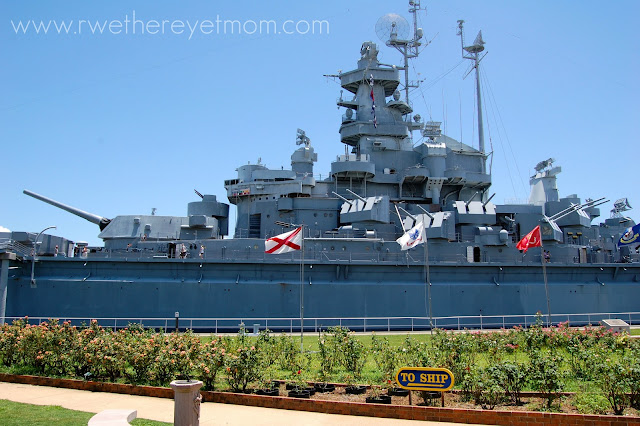 We had so many great adventures this summer  as a family that I want to to tell you all about – traveling 9 states and over 2500 miles, you end up seeing a lot!

To break up a 13+ hour drive from Florida to Illinois, we planned a few stops along the way, the first being the U.S.S. Alabama, located in bay in Mobile, AL.  We saw it as we drove thorough Mobile on our way to the beach the week before and knew it would fascinate our son.  It did not disappoint. 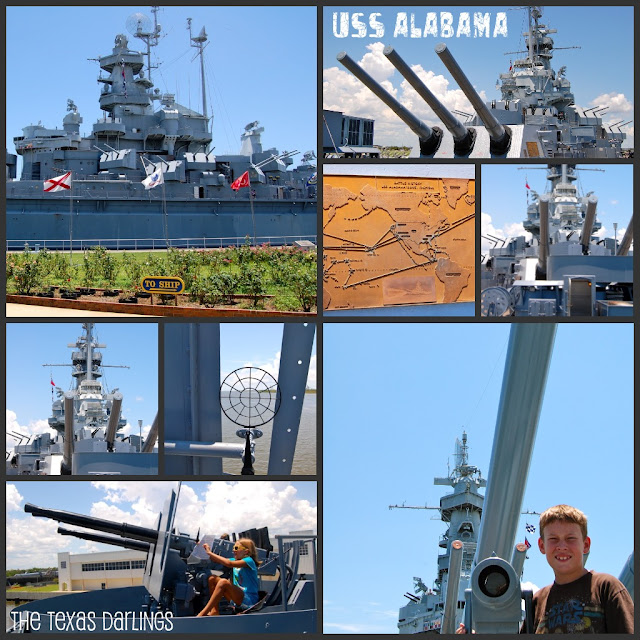 The USS Alabama is HUGE!! She is longer than 2 football fields and taller than a 20 story building.  When she would go through the Panama Canal, she barely scraped through…with 11 inches on each side!

A short history lesson (cause you know how much I love me some history)….placed into full commission in 1942, the USS Alabama spent most of her time fighting in the Pacific during WWII.  She was decommissioned in 1947 while in Bremerton, WAA. Towed back to Alabama in 1964, she officially opened as a war museum in 1965, by the citizens of Alabama to “honor those brave Men & women who fought in WWII”.

She was called the “Lucky A”, because during WWII, she lost NO American lives aboard her due to enemy fire.

The USS Alabama sits in the Mobile Bay and is used as a hurricane shelter.  In fact, 18 families were aboard during Hurricane Katrina. 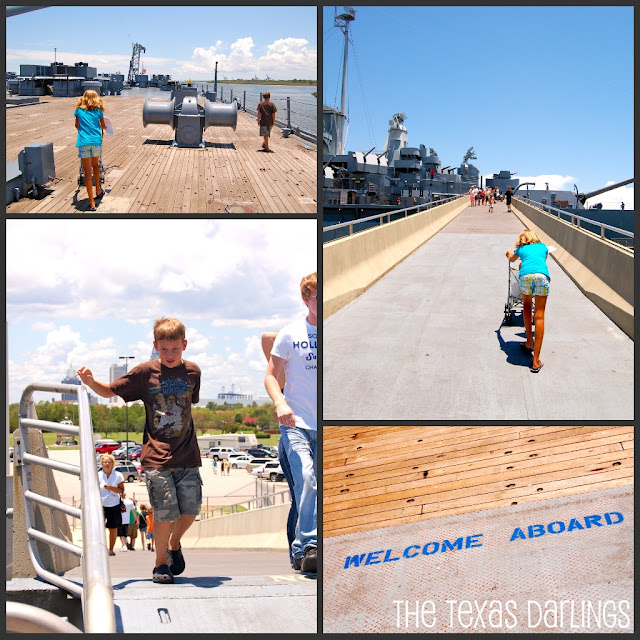 It’s a long hike up that gangway!!

We took our time exploring the whole ship – from sitting in gunner-seats (official term?  I don’t know…) to climbing up as high as we could go (no a/c….ick) to exploring all the upper & lower decks. 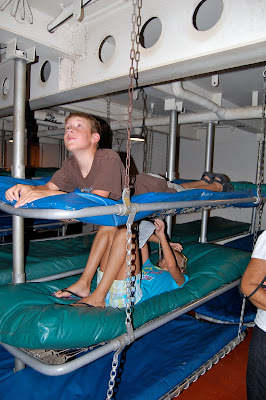 She was set up as it was during WWII.  We saw bunks, which all three kids had to try out.  We saw the mailroom, the “bank” where crewmen would get paid each week.  We saw the barber shop, the ice cream parlor, & the commissary where you could get your cigarettes and chewing tobacco.

It was amazing to us to imagine being on this ship for months on end and how organized and thought out those months would have to be.  I mean, think of this -The cooks had to prepare 7500 meals a day, that’s 50,000 a week, over 2.5 million a year…all in the middle of the ocean!!!  Holy cow! 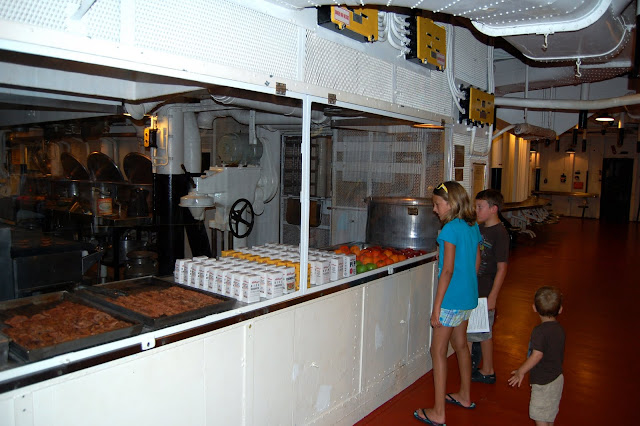 Coffee in the morning took 4 big 80 gallon pots to make 320 gallons of coffee.  And this is how they would serve it…..from 2 big spigots.  I’m sure back then, you didn’t really care how you got your coffee…just so you could have it! 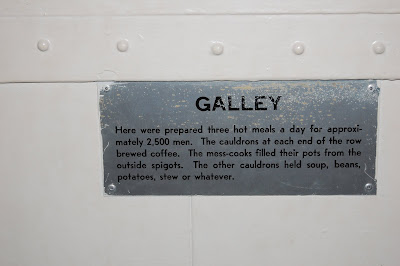 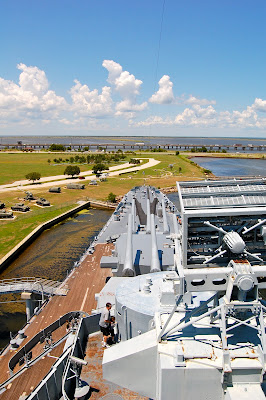 Battleship Park was created in 1965 to house the USS Alabama, with the majority of the fundraising done by Alabama school children. There is a ton of things to see and do here.  With tanks, planes, and more.

The park itself houses 22 plans from the past seven decades – very cool to see them all.  And we were also able to go through a WWII nuclear submarine. Talk about claustrophobic!!! 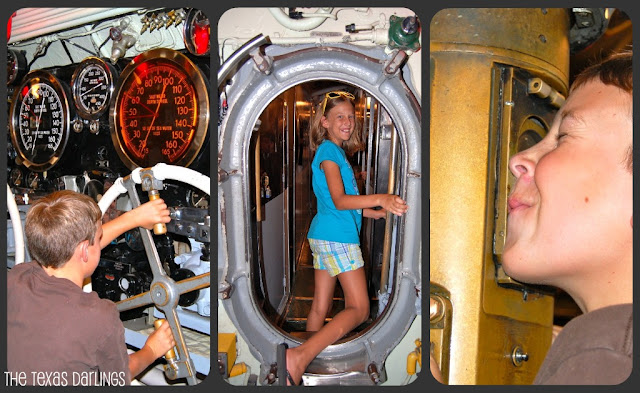 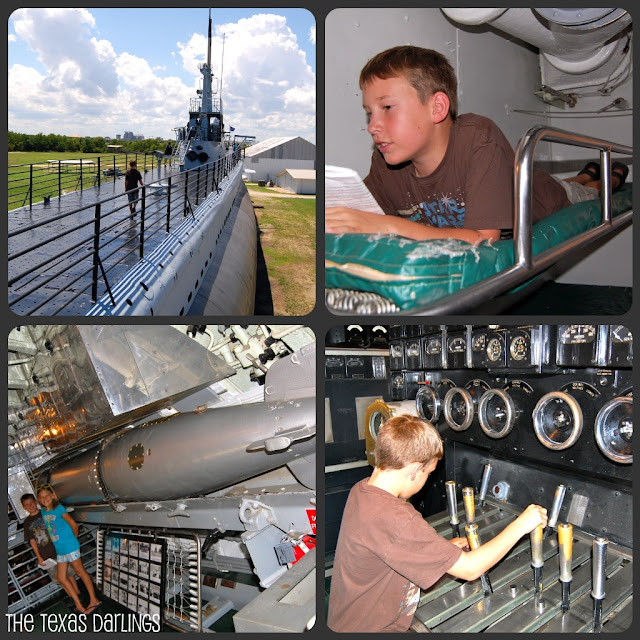 I am so glad that we stopped – we didn’t stay as long as we could have – but it was such a neat experience.  Just walking back in time and imagining ourself in the middle of the ocean during WWII puts everything into perspective…how much these young men sacrificed to fight for their country….to fight for everything we now have & enjoy.  I am so glad that my kids were able to see this.  We all walked away with a better appreciation.